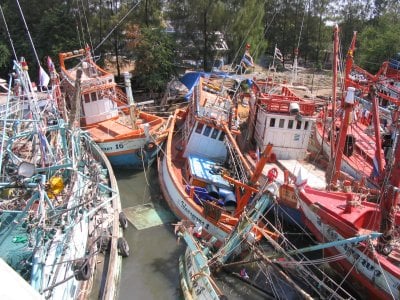 PHUKET: The Phuket office of the Department of Fisheries (DoF) expects to finish paying out about 46.8 million baht in aid to rebuild Phuket’s fishing fleet by the end of next week, Issara Bussayarat, Chief of the Phuket DoF office has told the Gazette.

K. Issara said that 550 fishing boats registered with the Department were damaged by the December 26 tsunami, and that the DoF has already paid some 30 million baht so that these boats could be repaired.

“Almost half of the 550 damaged boats are already back at sea and the rest are being repaired,” he said.

K. Issara added that about 800 boats that are not registered with the DoF need about 24 million baht for repairs. “We will pay about 70% [of the 24 million baht needed] in compensation to them,” he said.

Defending the department from complaints that the aid was slow in coming, he said,

“We have received a lot of phone calls – about 100 calls a day – asking why we are working so slowly, or why the caller has not yet received compensation.

“But right now we are checking all the evidence and all the details so that we do not give money to cheats, and this may delay payment,” K. Issara said.

He added that he expected all relief money for boat repairs to be handed out by March 11.