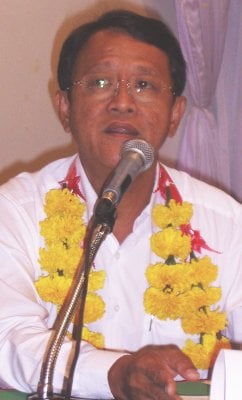 Mayor Somjai dismissed her three deputies – K. Ayuth, Niwate Aroonrat and Piya Siamhan – on April 8. K. Niwate was, however, given another position on the Mayor’s administrative team.

K. Ayuth and K. Piya yesterday held a meeting at the Pearl Hotel, attended by about 250 supporters, to explain the background to the dismissals.

K. Ayuth claimed that, in the run-up to the Municipal election of April 4 last year, he did not want to be in the administrative team, but Mayor Somjai persuaded him to change his mind.

He pointed out that the election posters for the Mayor’s Khon Noom Party showed the faces of four people – the Mayor herself and her three deputies.

By firing three of the people on the posters, he said, “What K. Somjai has done is break her pledge to the voters.”

K. Ayuth said that he had learned of his dismissal on the afternoon of Friday, April 8, in a phone call from K. Somjai. Three days later, K. Somjai announced the dismissals to the Khon Noom Party and the Municipal Council, asked for a vote of endorsement, and received it.

“It seems that might is right,” K. Ayuth remarked.

“I am not corrupt,” he said, pointing out that he had worked for the Municipality since 1990 and in the last election he had been among the first candidates to declare their assets to the Election Commission, and “everything checked out”.

“She told me the reason that I and K. Piya were being dismissed was that we had failed to pass an assessment of our work. Who carried out this assessment? Who assesses the Mayor’s work?

“I worked on environmental and educational policies related to garbage and water treatment. I worked for the people.

“I want to thank all those put a cross against my name on the election ballot as Somjai’s deputy. And I am still waiting to hear her real reasons for dismissing me.”

K. Ayuth added, “I would like K. Somjai to take responsibility for her actions by resigning from the post of Mayor of Phuket City.”

Nophon Siamhan, a relative of K. Piya who sat with the aggrieved politicians at the meeting and described himself as “a simple voter”, said, “We will give the Mayor three days to explain what is happening. If she does not explain in that time, we will begin collecting signatures from voters for a petition to dismiss her from office.”