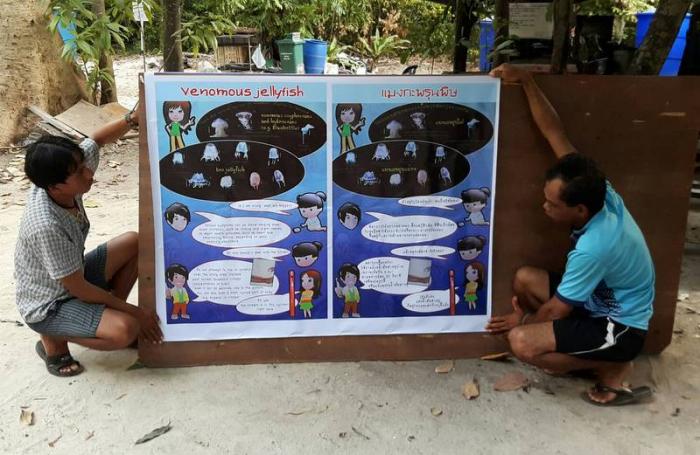 “The signs are in English and Thai. They have been put up to warn the public about the venomous jellyfish,” said Jampen Pormpakdee, chief of the Koh Hong protection zone of Than Bok Khorani National Park.

“We are clearing the dead jellyfish from the water and on the beaches. They are a few centimeters long, and known locally as ‘fire jellyfish’. They are venomous, causing irritation and pain if touched,” he said.

“If you are stung by one, pouring vinegar on the wound can help relieve the pain. However, some people may have allergic reactions to the stings and will have to see a doctor.”

Officers believe the jellyfish have been washed toward the shores due to a change in wind direction.

“They belong to the Pelagiidae family, but we are not certain about the exact species,” said Charatsee Aungtonya, a marine expert from the Department of Marine and Coastal Resources (DMCR). “However, it is best to avoid them, especially their tentacles.”

“There are no jellyfish inside the lagoon, so tourists can swim there if they want,” Mr Jampen said.