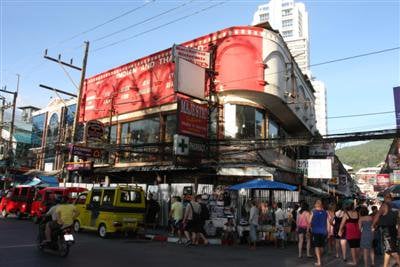 PATONG, PHUKET: In the latest fire to hit the beach road in Patong, an Indian restaurant, a tailor shop and a pharmacy were gutted in a pre-dawn blaze Thursday morning.

The fire broke out at about 3am at a two-story building on the corner of Soi Post Office, just north of McDonald’s.

Five fire engines from Patong Municipality were able to contain the blaze, but two shophouse units selling souvenirs, on the ground floor, and the “Kwality India and Thai food” restaurant on the second floor were gutted.

A Siam Commercial Bank exchange booth and ATM machine on the ground floor beneath also sustained some damage.

Mr Pongpetch told the Gazette the fire started on the ground floor and spread very quickly, fueled by garments, bags, clothes, shoes and other items on sale to passing tourists.

“I was awakened by a phone call from my brother at about 3am. By the time I got there everything inside was burned. I have two stalls inside and the damage to my belongings was about 3 million baht. Overall, I think the damage will be about eight or nine million baht.

“I took out an insurance policy a few months ago, but unfortunately my colleagues were uninsured,” said Mr Pongpetch, who planned to meet his claims adjuster today.

“I don’t know about the cause of the fire. I have worked here more than 10 years and there has never been a fire before. It wasn’t arson like the fires at Jintana Plaza, as we don’t have any conflicts with anyone. We all get along here, just like family,” he said.

Police forensics and fire department investigators have already visited the site and will release their findings soon, Mr Pongpetch said, adding that he would ask his landlord to lower the rent.

Kathu Police Superintendent Grissak Songmoonnark said all the owners said the fire started in the middle unit of the building, which comprises three shophouse units.

Unlike numerous other fires along the beach road in recent years, the electric cables running along the sidewalk outside were not damaged.