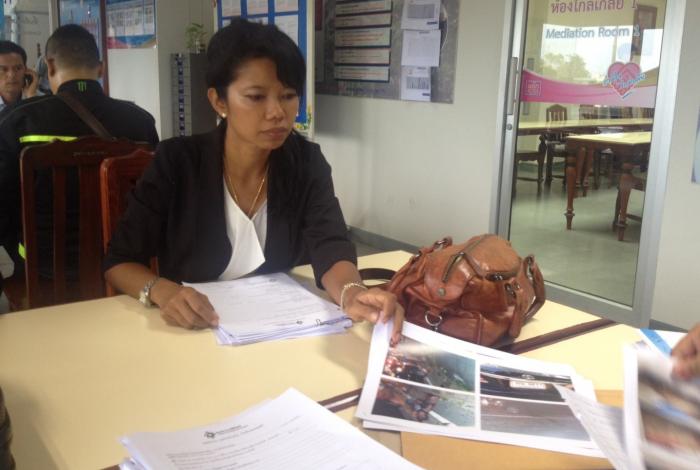 PHUKET: The family of a German man killed in a Phuket road accident in December last year has demanded 1.3 million baht as compensation for his death and 800,000 baht for his partner’s injuries.

The suspect, Jakarin Rodpradit, 26, has requested a month to assess the situation, after both sides met for negotiations at Phuket Provincial Court this afternoon. He was granted until August 4, which is when the parties are expected to next meet.

Mr Jakarin originally denied responsibility for the crash between his car and a motorbike, driven by Andreas Walter, 47, with his partner Patcharin Lammai, 35, riding pillion (story here).

About a week after the accident, Ms Patcharin and her family submitted CCTV footage and presented witnesses to the police. When faced with the new evidence, Mr Jakarin confessed to the charges, Lt Nipon Temsung of the Karon Police told the Phuket Gazette (story here).

“Mr Jakarin was charged with reckless driving causing death, injury and property damage, without stopping and assisting the victims. This is a more serious crime than just reckless driving,” said Ms Patcharin’s lawyer, who asked not to be named.

“Mr Walter’s family initially wanted to fight the case and have Mr Jakarin serve jail time. However, after his confession, they agreed to negotiate for compensation.”

Mr Jakarin took the opportunity to apologize for his actions in December, and is currently involved in discussions with his private insurance provider, as well as PorRorBor (the compulsory motor insurance provider).

“1.2mn baht is the maximum amount that insurance companies are liable to pay in these situations – one million baht by the private company and 200,000 baht by PorRorBor. We need time to discuss the extent to which the companies will be willing to pay in this situation,” said Mr Jakarin.

“As for the 800,000 baht for Ms Patcharin’s compensation, I honestly feel it is quite high. However, we will consider and discuss this as well.”

Ms Patcharin, however, was insistent on her demands and said that she will push for a harsher sentence if they are not met.

“This amount [800,000 baht] includes the hospital fee, plastic surgery, laser treatment, loss of income during my time in the hospital, damage to the bike, and various other expenses. If our terms are not met, we will do our best to ensure that he faces jail time,” Ms Patcharin told the Gazette.

“We want everything to end peacefully. Let’s wait and see what happens in August,” she added.