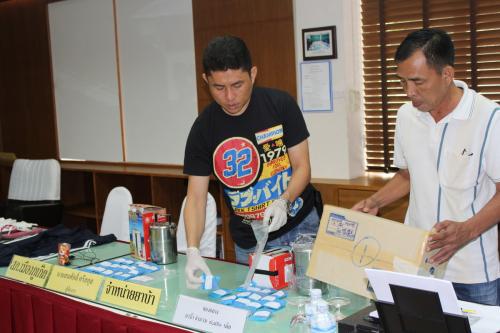 PHUKET: A man was charged with drug dealing after Phuket City Police pounced on him picking up a package that he claimed was supposed to encase a quilt – not the nearly 8,000 ya bah (methamphetamine) pills police found.

The man, Somsak Srisakul, was presented to the press today at Phuket City Police Station.

“We received a tip-off that drugs would be sent to Phuket through a delivery service and then picked up by a member of a drug network,” explained Phuket City Police Deputy Superintendent Prawit Engchuan.

The package arrived on August 10. It was addressed to Somsak Srisakul.

“We waited for the man to pick up the box. Once he identified himself as the intended recipient of the parcel, we moved in,” Lt Col Prawit said.

Inside the package were two sets of food-carrying containers, called pinto in Thai, packed with a total of 7,791 ya bah pills.

“Mr Somsak told us that he didn’t know what was actually in the box, as the friend that paid him 1,500 baht to pick it up told him it was a quilt,” Col Prawit said.

Mr Somsak was charged with the possession of a category 1 drug with intent to sell.