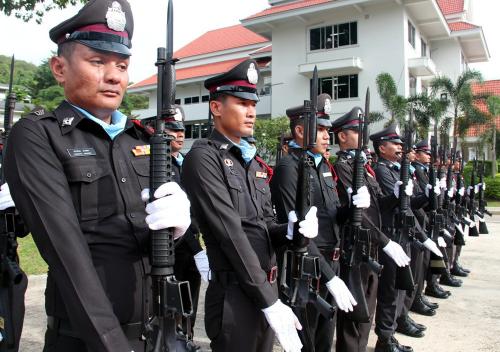 The move is to upgrade the island’s force to meet the demands of increasing numbers of tourists and residents on the island.

“Phuket will have a bigger and more efficient police force in 2014,” General Adul said.

The first batch of new officers, a group of 97 new graduates from the police academy, are due to arrive on the island in November.

“That’s not enough to handle our population, which is officially 320,000, but in reality is closer to a million people.

“The increasing number of tourists creates more problems that we have to deal with, such as illegal guides and businesses taking advantage of tourists,” he explained.

In addition to increasing the size of the force, the current plan also calls for up-scaling its equipment, operating systems, skills and look.

“In 2014 Phuket police will upgrade to international standards, so we have to upgrade uniforms and vehicles, as well as the procedures we use to solve tourist problems,” Gen Adul said.

“We’ll add new signs in English in police stations and at immigration to make them easier for tourists to use, and we’ll continue with our English-language training,” he added.