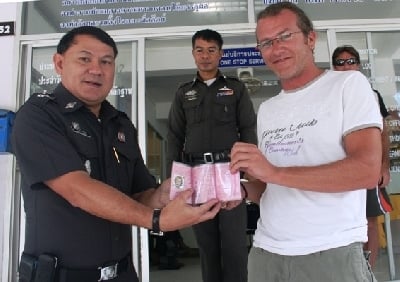 KAMALA, PHUKET: Italian tourist Fabio Fanzani was reunited with his lost wallet today after an appeal was launched on this website yesterday.

Kamala Police had been trying in vain to contact the owner of the wallet after it was found by a Thai tourist, Ms Khanungnit Kwanyao, at Surin Beach and handed over to authorities over a week ago.

When Gazette reporters went to cover the successful arrest of two thieves by Kamala police, Lt Col Supavich Suvanpirom showed them the wallet which contained an Italian driver’s license, 3,300 baht, 20 euros and one US dollar in cash.

Shortly after posting the appeal on line a Gazette Forum reader, going by the somewhat appropriate name of ‘James Bond’, tracked down Mr Fanzani  using Google and Facebook, and sent him the message that his wallet had been found.

“I have been coming to Phuket for over 12 years and feel very lucky to have my wallet back. I had given it up for lost when I dropped it, and now I have two wallets. Thank you to all who have helped me retrieve it, and Happy New Year Phuket,” he said.