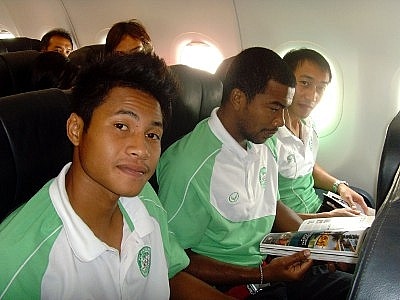 PHUKET: FC Phuket should be well rested for tomorrow night’s away match against Chiangmai FC, having flown up to the northern capital yesterday afternoon on a flight operated by team sponsors AirAsia.

Despite prolonged flooding that has swept across Thailand’s central and northern regions, which in only the past week saw Chiang Mai added to the list of “disaster area” provinces, a large crowd is expected to turn out for the fixture.

The match will be held at Somphot 700 Pi Stadium, located on the northwest side of the city, with the kickoff scheduled for 6pm.

The stadium is reportedly unaffected by the floods, so far.

According to Thai Premier League (TPL) Division One attendance records, Chiangmai FC this season have the second-highest home-game attendance average, with 9,428 spectators per game.

The only team with a higher average is Songkhla FC at Tin Sulanond Stadium, with 13,262 fans per game.

Though the “Lanna Tigers” enjoy a loyal following, the team is currently in 16th place – and thus the third-worst ranked in TPL Division One – having only won four of their 25 games played this season.

On a four league-game winning streak, Phuket are now in 6th place of the league after winning 10 of their 24 matches while drawing eight and losing six.

However, Phuket has won only two of their 12 away matches. They have drawn six and lost four, scoring 12 goals while conceding 16.

Depending on how fourth-placed Songkhla and fifth-placed Rajpracha fare in their matches this weekend, a win for Phuket could see them move up the table.

Phuket Coach Somphong Wattana was quoted in a Siam Sports pre-match report as saying that Phuket will be giving their full efforts for the upcoming match, even if Phuket enjoy a better standing.

Phuket go into tomorrow’s match again without Sarach Yooyen, who is still on suspension for previous bookings. Sarach Yooyen opened the score in the last match against Chiang Mai on April 17 in Phuket.

In that match, Phuket went on to finish with a 4-0 bragging right. To read the full match report, click here.

Other TPL Division One matches this weekend are as follows: