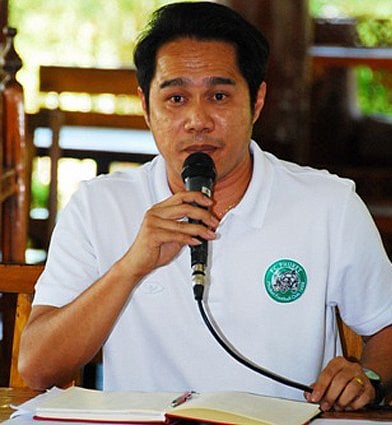 PHUKET: FC Phuket could manage to survive at least one more season, but not with the help of any one wealthy benefactor.

Executives have agreed to allow a group of fans to help raise funds by selling shares of the team to other fans for 1,000 baht each.

The latest development unfolded yesterday at Mai Morn Seafood restaurant in Phuket Town during a meeting held between executives, fans and potential investors to discuss the future of the team

At the meeting was ex-president Narubas ‘Ko Lek’ Aryupong as well as representatives of potential investor group, FC Two Heroines and a leading fan club group, who wish not to be named at this time.

Pleased with the offer, the executives insisted that this initiative will enable the team to compete in the Thai Premier League (TPL) Division 1, 2012 season which begins in March.

Ex-president Narubas Aryupong said, “With this solution, FC Phuket’s fan club will be a part of the ownership. The team will be run by Phuket people and for Phuket people, and will last for a while.”

In the meeting, it was also concluded that new executives will be selected in the next meeting scheduled for February 2 at Surakul stadium, while Ko Lek agreed to continue being acting president until the vacancy is filled.

The reasoning and plans for fund raising will be explained to fans on that day (Feb 2), those at the meeting were told.

Ko Lek said “I open the door for each fan club member to own [a part of] the team. All are welcome to come to the meeting on February 2 to show how much passion Phuket people have for football by helping the team.”

“On that day, it is you, the fan club who will choose the one you want to manage the team. I will help as acting president until the new management team is ready to take over.”

Regarding team preparations, Ko Lek said he will be able to do everything in time before the February 8 deadline to send staff and players’ lists to the TPL .

Ko Lek said “I will now go to Bangkok to confirm the team’s [Division 1] rights with the TPL and represent the team for match scheduling for the coming season.”

“After that, I will come back to manage staff and player recruitment. I have talked with many players. Some players will remain, as with last season. Others will be new.”

He added that the goal for the coming season is only to survive D1 without being relegated, and not expect promotion to the premier league.

“With the limited budget at the beginning of the season and with less time to prepare the team, what we can hope to do for this season is survive in Division 1.”

Ko Lek concluded, “With the fund raising, FC Phuket will the first of its kind in Thailand to give a chance for its fan club to own the team. I am very glad that the fan club have supported the team until the last minute, and didn’t give up on us. So now we can say that FC Phuket is by Phuket people, for Phuket people.”