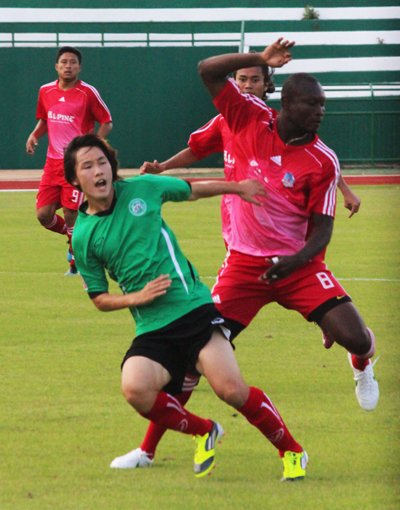 The game was generally played at a slow pace and had the feel of a match where both sets of coaches acknowledged the low key nature of the contest.

Phuket did most of the running in the first half with Ivorian forward Ibrahim Kanoute and Tewadej Unthong both through on goal in the opening minutes with only the keeper to beat.

However both players could not match the composure of the away shot stopper and failed to score.

Kanoute proved a constant danger leading the line for FC Phuket until his injury, an apparent groin problem. This could prove costly in more important fixtures to come as his contribution at the spearhead of attack, supported by runners through midfield, was the only significant threat on goal.

The visitors started the second half with more purpose and the game evened out in terms of possession and attempts on goal, but with both managers making numerous changes in personnel the game lacked cohesion and consistency.

The small crowd that showed up grew frustrated, as did the players involved, with misplaced pass after misplaced pass, only separated by a poor touch or lack of composed finish.

FC Phuket will chalk this one down to a good run out against a worthy opponent and will now turn their attention to their upcoming league games.

Coach Milos Joksic will be sweating on Kanoute’s injury and praying that it is not as serious as it first appeared.

Yadanarbon have continued on across the bay to play another friendly match against the current Thai Yamaha 1 (TD1) league leaders, Krabi FC.

Kickoff for this match, to be played at Krabi Central Stadium in Krabi Town, will be at 6pm.

Meanwhile, FC Phuket, 15th in the TD1, return to league action on Saturday evening with a home match against 16th place Saraburi FC.

Kickoff will be at 4pm at Surakul Stadium.

Laguna Phuket Marathon to take “Chi Running’ in its stride