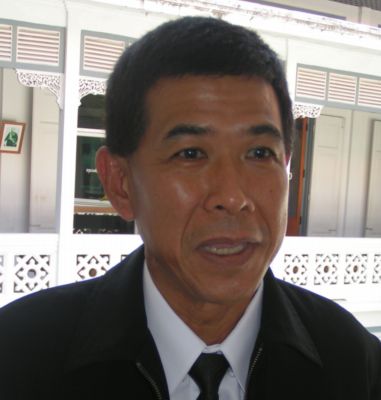 Maj Kamon Wongsombun, director of the Airports of Thailand (AOT) Development and Planning Division, started off with an overview of the project, work on which is set to begin in early 2010 and finish in 2014.

The expansion, to increase the airport’s passenger transit capacity to 12.5 million passengers per year, has been divided into four main work groups.

Group one work involves building a new parking area for planes away from the main terminal, doubling the number of taxiway lanes from four to eight, as well as expanding refueling bays and other aircraft service and maintenance facilities.

The international terminal will be located to the west of the existing terminal, in the area currently occupied by airport office buildings and warehousing. Group two work also includes the construction of a replacement 4,800-square-meter operations and office building and multi-storey parking garage with spaces for 1,000 vehicles. These facilities are scheduled to open in 2012.

Group three work involves the construction of another 5,000-square-meter multi-purpose building to the east of the existing terminal to house new offices, warehousing and other facilities.

Nitcharee Promwisuttipon, project manager of Bangkok-based SEATEC Consulting Engineers said the three-month study will be concluded by the end of March.

When the study is completed in March, a meeting will be held and recommendations to minimize negative environmental impacts will be suggested and discussed.