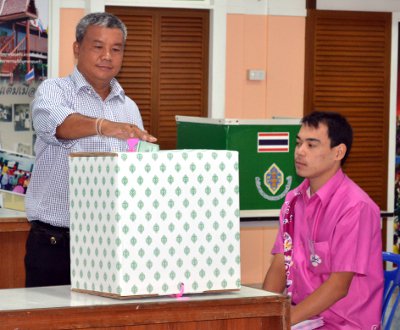 PHUKET: While Pheu Thai will form the next Thai government after winning at least 262 seats in the general election, Phuket remained firmly Democrat with incumbent MPs Anchalee Vanich Thepabutra and Raywat Areerob retaining their seats by huge margins.

However, there were 3,965 spoiled ballots and 7,845 people selected the “Vote No” option, expressing their dissatisfaction with all candidates contesting the seat.

Counting went on late into the night despite predictions that full results would be available early.

All results in this report were the latest figures posted by the Phuket Election Commission at 11:15pm.

By that time, however, the nationwide result was a foregone conclusion, with Abhisit Vejjajiva conceding defeat more than two hours earlier.

“I congratulate Pheu Thai for its chance to lead the next government and wish Yingluck Shinawatra every success as the first female prime minister of Thailand,” he said.

Pheu Thai in potential landslide after half the votes are counted