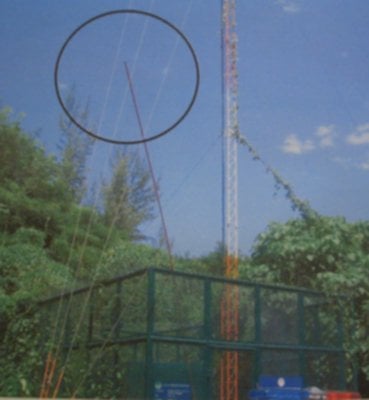 News of the vandalism was reported by OrBorJor Vice-President Suthin Uthaithamrong at the January 30 meeting of provincial office chiefs at the Thavorn Grand Plaza Hotel.

K. Suthin explained to the Gazette that to steal the copper, thieves had broken into padlocked enclosures around eight towers, all in remote high-elevation locations.

He listed the sites as: Laem Phromthep, Sapam, Tah Chat Chai, Nai Thon, two sites in the Nakkerd Hills, one in front of Veerastree Anusorn School in Thalang and one in front of Kamala Police Station.

The lightning rods are used to protect repeater stations of the OrBorJor‘s emergency radio network, which was built after the tsunami at a cost of more than 8 million baht to allow communication in the event of another disaster that causes mobile phone networks to fail.

The network is the brainchild of OrBorJor President Anchalee Vanich-Thepabutr, who after the tsunami found herself unable to coordinate emergency response efforts because the mobile phone system she used was jammed.

The repeater stations form a ring around the island that allows users, including members of the OrBorJor beach guard and the Tourist Rescue Center in Chalong, to communicate by walkie-talkie.

The network’s base station is located on a hilltop in the Nakkerd Hills, near the site of the Mingmongkol Buddha statue being built, K. Suthin said.

The network covers the entire island and emits signals that can be picked up as far away as parts of Krabi, he said.

The thefts did not disable the repeater stations, but hindered their effectiveness during electrical storms and left them vulnerable to lightning strikes that could cause even greater damage, K. Suthin added.

The damages have already been repaired at all locations, at a cost of about 50,000 baht each, out of the OrBorJor‘s emergency fund, he said.

The first thefts were reported in mid-2006, with three thefts – in Kamala, Sapam and the Nakkerd Hills – carried out over the New Year holiday period.

Padlocked enclosures with chain-link fencing 2.5-meters tall had not deterred the thieves, who left behind some of the cutting equipment they used at some sites, he said.

K. Suthin blamed secondhand shops that deal in stolen goods for creating a market for thieves. He said good-quality copper of the type stolen could fetch up to 1,000 baht per kilo at a scrap yard.

In order to prevent future thefts, more frequent checks will be made at all enclosures and stronger locks will be used, K. Suthin said.

Bantoon Thongtan, Head of the Phuket Attorney’s Office, told the meeting that he will recommend prison terms, not just fines, in cases of theft of government property – especially in cases where public safety is jeopardized.