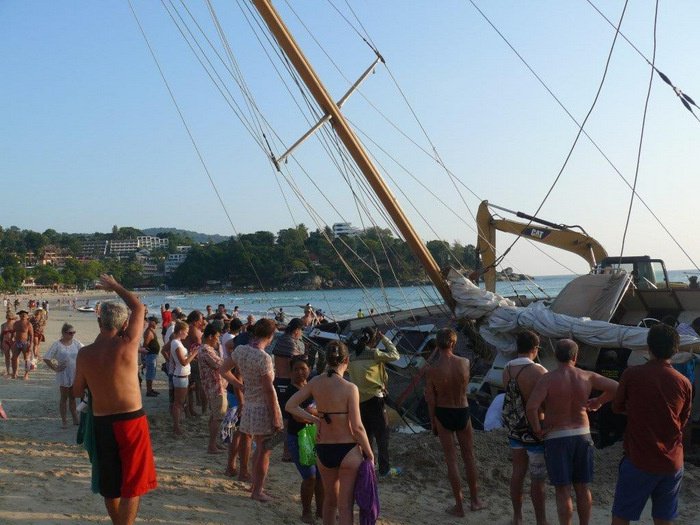 PHUKET: The salvage team attempting to re-float the yacht still stranded on the sand at Kata Beach will make another attempt today, nearly a week after the boat was beached by a passing storm.

The Inisfail of the Isles of Scilly was beached on Wednesday after the boat drifted on her anchor. Attempts by the two Australian men on board failed to save the boat from becoming beached (story here).

A full day of co-ordindated efforts yesterday, using old-fashioned manpower and a 40-tonne crane, managed to turn the boat’s bow to sea, though the starboard gunwhale sustained damage in the process.

Attempts to re-float the boat today will aim to take full advantage of the high tide at 3pm.

The past week has provided scores of tourists at Kata Beach with the spectacle of the boat-salvaging operation, as a backhoe excavated a channel for the boat to access the sea and workers scrambled to try to get the boat back onto water.

The two Australians who were on board the boat when it became stranded have reportedly returned to Australia, the Phuket Gazette has been told.

They have also reportedly hired Mark Horwood of Phuket’s Latitude 8 boatyard to direct the salvage operation.

Mr Horwood has for years served as one of Phuket’s leading salvage operators, being called time and again to re-float or recover boats in distress.