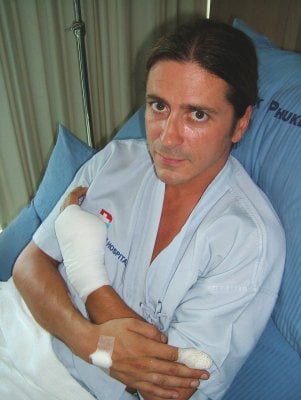 PHUKET: A 32-year-old Briton is recovering in hospital here after his left thumb was bitten off and eaten by a giant moray eel while he was diving at the well-known East of Eden dive site in the Similan Islands.

Matt Butcher, of Stanstead, Essex, said he had fed the 2.2-meter eel regularly over the past 18 months, and that she was well-known in the diving community for her friendliness.

“Many people dive there to see her,” he said from his bed at Bangkok Phuket Hospital. “She will swim in between your legs or curl herself around your arms. Divers often feed her scraps of food taken from their liveaboard boats. She likes sausages and will even eat fruit.”

Mr Butcher told the Gazette how, on April 18, he and his buddy, 21-year-old Becks Herbert, from Norwich in England, had descended to around 14 meters with some food for the eel.

He said, “I’ve been feeding the eel for 18 months and nothing seemed different on this occasion. She seemed quite playful, and was playing with Becks, while I took the food – a sausage wrapped in a plastic bag – from the pocket of my BCD vest and threw it to her.”

Mr Butcher said the eel (Strophidon sathete) circled round behind him and latched onto the thumb of his left hand, which was still holding the bag.

“I couldn’t get my thumb out of her mouth once she had started biting. The teeth of a moray are angled backward so she got a better grip [on my thumb] every time she bit down,” he said.

“I tried pushing the fingers of my right hand into her mouth to try and force her mouth open but she did not let go; she could taste blood by then…

“She was shaking her head from side to side, biting harder all the time. Five seconds later, my thumb just came off.

“She ate it and swam away. I didn’t even have time to reach for my knife.”

Mr Butcher and Ms Herbert surfaced and returned to their dive boat, the MV Queen Scuba.

He received first aid from Royal Thai Navy (RTN) personnel at Similan 9 Island before National Park staff took him by speedboat to Tab Lamu, whence he was transferred to Phuket.

Mr Butcher praised everyone involved in rescuing him. “They were great, everyone from the crew on board the Queen Scuba to the RTN, the park rangers and the hospital. They all knew exactly what they were doing.”

Mr Butcher, who is right-handed, has been told that surgeons may be able to transplant one of his big toes to replace his thumb.

He said that he will continue diving – although he will no longer feed eels.

He added, “I was wearing shorts during this dive, and I’m just glad that the thing didn’t swim up one of the legs and bite something else.”