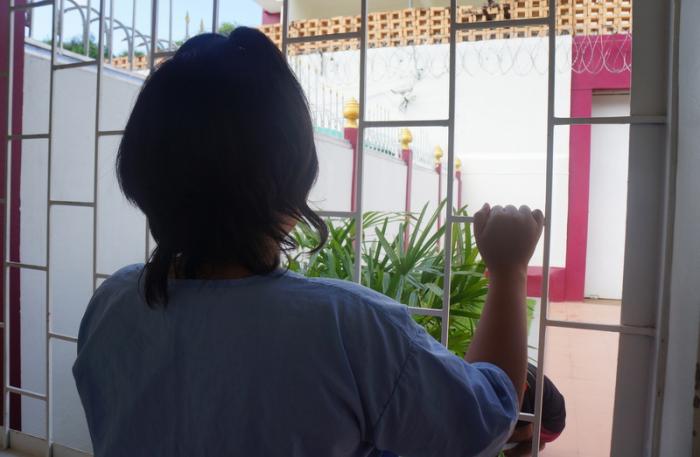 PHUKET: Behind the walls of Phuket Provincial Prison are more than 2,000 inmates. About 350 of them are women; most of them doing time for drug dealing.

The Gazette takes you behind the bars of Phuket’s cramped prison for exclusive insights into the lives and circumstances of two women, ‘Wan’ and ‘Bee’, locked up for drug-related crimes in a facility built more than 100 years ago to house only 800 inmates.

Are social changes and the pressures of modern society to blame? Did these women have a choice or was drug dealing the only way out of poverty?

Wan and Bee’s days begin at 6am. They either take part in job training programs or work in the bakery, in which case they get up at 5am. The prison bakery runs every day, making food for the inmates and to sell at a stall in the visitors waiting area.

The female inmates follow a strict daily routine. After rising, they exercise for an hour, then take a shower before breakfast. All the food served at the prison is vegetarian.

Married mother of two, Wan, 28, started selling drugs as a quick cash earner to support her children and husband, a mechanic earning a small wage in a small back-street garage.

“I was a housewife looking after our two children; a 10 year old and a newborn. We were all surviving on my husband’s small wage. I wanted more money but I didn’t have a job. Selling drugs was the only thing I could think about doing that would allow me to make money and be at home with my children. Some friends introduced me to the drug world,” said Wan.

Four months later Wan was arrested with more than a kilogram of crystal methamphetamine (ya ice).
“I knew right from the start that one day I would be caught.”

At the time of the interview, Wan was still waiting to be sentenced and had no idea how long that sentence might be, yet she was already resigned to her fate of a life behind bars.

“I lost my future. The only future I have now is here, serving time for selling drugs. I can’t be with my children or my husband. He is out there working hard, alone, to take care of the kids. I regret what I have done. If I could turn back the clock, I would definitely not do it again,” said Wan.

As well as missing her husband and kids, Wan said that seeing her parents happy was what she wanted to see more than anything else.

“I never did anything to make them [my parents] happy. I never bought them anything, never took them anywhere nice. I was not a good daughter. I did not take good care of them and now I am stuck here. I want to pay them back but I am not sure if I will ever have the chance.”

“If I do get out, I will stay away from drugs.”

Like many who get mixed up in the drugs, Wan comes from a broken home. However, she does not blame her circumstances for ending up in jail. She accepts that she is now paying the price for the
decisions she alone made in the past.

“My parents separated years ago. I was left to fend for myself from a young age, but it’s not their fault that I decided to start selling drugs,” said Wan.

“It’s not like the movies, where drug dealers are forced into selling drugs. It’s up to the individual what they choose to do about their circumstances.”

“I want to warn anyone thinking about getting into drugs to think twice. It seems like an easy way to make a lot of money very quickly, but please stop and think first. You are about to trade your whole future for some quick cash. You may get away with it for a while but it will not last. You will eventually get caught,” said Wan.

‘Bee’ is 21 years old and is serving a lengthy sentence for drug dealing. It was just 117 grams of crystal meth that changed her entire life. By the time she gets out she will be almost 50 years old.

“I lived with my father but I did not want to bother him by asking for money. I found my own ways to earn a living. I grew up in Phuket and finished secondary school (pratom 6). I have tattoos, which makes it difficult to find a job. Most employers turn their noses up at people like me, with a low education,” said a calm and collected Bee, who seemed to have already accepted her future life behind bars.

“I wanted to study more but I never had the chance. We did not have enough money and my father didn’t do much to support me.”

“I was selling drugs for about a year before I was caught and sentenced to 25 years in jail,” said Bee.

Phuket Provincial Prison only houses inmates serving sentences of under 15 years. Bee however, remains incarcerated in Phuket while waiting for the verdict of another trial on drug-related charges, before being transferred to Nakorn Sri Thammarat Central Prison.

“Money was the only reason I got into the drug business. Just like everyone else, I had to earn a living. Without a good education and nobody to support me, my only option was to sell drugs,” said Bee.

“My father passed away not long after I was imprisoned. I didn’t see him again. I had a hard time dealing with that.

Just like Wan, Bee looks forward to one day seeing her family again.

“The first thing I want to do when I get out is see my younger sister and my aunt. They are both in Phuket. I hope they are still around then.”

Even though Wan and Bee are in prison for similar crimes and are now paying with their lives for the bad decisions they made, each has a starkly different outlook to the other. Wan vows never to go near drugs again. However, Bee is much less certain about being able to steer clear of the drug scene in the future.

“I do not want to get involved in drug dealing after I am released, but I can’t tell what my situation will be in the future,” she said.

Options for women in need

The Phuket Shelter for Children and Families in Koh Sireh is one local organization empowering struggling women. Director, Sirumporn Komonsanao, says there are many options for women who are willing to work.

“The shelter is one of a network of shelters in every district in the province supported by the Department of Social Development and Welfare. Each community has someone in charge of helping those women in the area looking for work,” said Ms Sirumporn.

“If you need help, just call us on 1300. We are available 24/7. Or you can contact any government office in your community, where job training is provided free of charge. Women in the community can make suggestions about the things they want to learn and we will look for experts to train them, and provide all equipment,” said Ms Sirumporn.

Ms Sirumporn admitted that despite their efforts, there are still some women in desperate need of help who still fall through the cracks.

They would be people unwilling to share their problems with others or simply don’t know that there are people out there ready and willing to help.

“It is our job to help women get back on their feet so they can care for themselves and their family but, ultimately, it is their job to work at it rather than taking short cuts by selling drugs,”

“A lot of women who live in Phuket are from other provinces and I believe many end up involved in the drug trade because of the high cost of living here,” said Ms Sirumporn.

“Many are single mothers who are desperate to find a way to provide for their children. Naturally, any mother will do whatever she can to support her own children. Selling drugs can appear to be a quick and easy way to make ends meet but that is a choice only they can make,” she said.

“There are many other ways for women to make a decent living. It is a matter of choice; deciding whether or not to risk the consequences of earning money illegally.”

“Think of all the hard-working people out there, working long hours for a low wage. They don’t turn to drugs. They just get on with life, no matter how hard it is,” he said.

“Of course, finding a quick and easy way to earn money can be very attractive, but not everyone chooses to deal drugs. Those who take short cuts by dealing drugs will eventually end up in jail.”

Parts of Phuket prison have recently been painted, making it as charming as a prison can be.

The place is clean and the inmates live by daily routines not dissimilar to the lives of those beyond the prison walls.

However, prison warden, Suparat Tantipongwiwat, has firm views on the purpose of the prison.

“We do our best to take care of the prisoners. However, this is still a prison.
It is meant to curtail certain freedoms. This is a place for people who break the law,” she said.

“Nobody ever wants to get locked up, but the way to stay out is easy. Don’t break the law.”