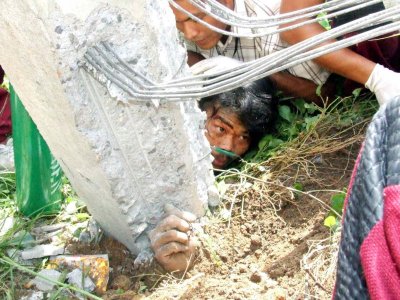 PHUKET (Gazette, Kom Chad Luek): A Dutchman turned the tables on two men who allegedly fired a gun at him as he drove his pickup along Chao Fa West Rd yesterday morning, chasing them down and ramming their motorbike into a power pole.

One of the two men was killed, the other seriously injured.

Pol Lt Col Jessada Sangsuree of the Chalong Police Station said that he initially received a report of an accident involving a green Isuzu D-Max pickup and a motorbike on Soi Thanuthep, off Chao Fa West Rd, in Chalong Village 8.

Arriving at the scene with rescue workers from the Kusoldharm Foundation, police found a power pole snapped in half by the truck’s impact. One of the two alleged attackers was still at the scene, moaning for help, with his arm jammed under a broken section of the pole.

Police identified him as Nakhon Sri Thammarat native Sooksamart Dampheng, 21, the driver of the motorbike. He was sent to Wachira Phuket Hospital, where he is still being treated.

The alleged gunmen, 32-year-old Supoj Jaihao, also of Nakhon Sri Thammarat, was rushed to Vachira Phuket Hospital by local residents before police arrived. He later died in the hospital’s emergency ward from internal injuries, his lung having been punctured by a broken bone.

Police noted as evidence in the case one hole in the driver’s side door of the pickup, along with the homemade shotgun allegedly fired by the two assailants.

The driver of the pickup, 47-year-old Dutchman Jen Jensen, identified himself to police as the owner of the Easy Internet shop on Chao Fa West Rd.

He said he was driving with his Thai girlfriend about 300 meters from the accident scene when he noticed two men trailing him on a motorbike. They pulled up alongside his vehicle and Suphot drew his weapon and fired, missing his intended victim and hitting the driver’s side door.

The gunmen then attempted to flee but Mr Jensen gave chase. When they slowed to negotiate a corner Jen decided to ram them into the utility pole, he said.

Police are working on the assumption that the attack was the result of a business conflict that arose last August and has resulted in mutual death threats.

Col Jessada said Sooksamart would be charged with attempted murder.

Police are still considering charges against Jensen. These might including negligent driving resulting in another person’s death and committing bodily harm, he added.