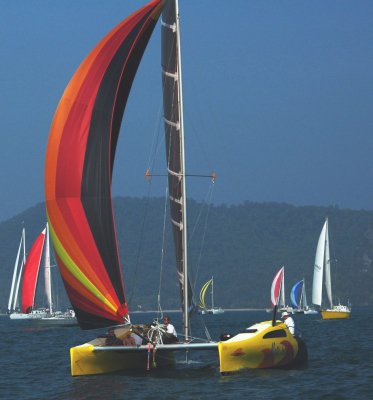 PHANG NGA BAY: Winds of 13 knots gusting to 18 turned today into a day of thrills in the 2006 QBE Phang Nga Bay Regatta, after three days of less exciting breezes.

Despite being left behind by the fleet in the lee of Koh Phi Phi Don, Scott Duncanson and crew aboard G4S (also known as Somtam Express) recovered to win the Racing Class by just five seconds over Vino, giving G4S top honors in the regatta, winning all four races both first across the line and on handicap. Second was La Samudra and third Switchblade.

An indication of conditions on the downhill run from Phi Phi Don to Chalong Bay was given by Pytheas Aura, whose spinnaker exploded into three pieces, and Ruby Tuesday, whose crew had to haul down the kite after the spinnaker pole came away from the mast.

In the Cruising A class the only woman skipper in the 45-strong fleet, Mia Gillow, brought Minx home to overall victory, followed by Cinders and Simba. Delfina won Cruising B, followed by Blue Jay and Rusalka.

Valentine’s Day goes to the dogs