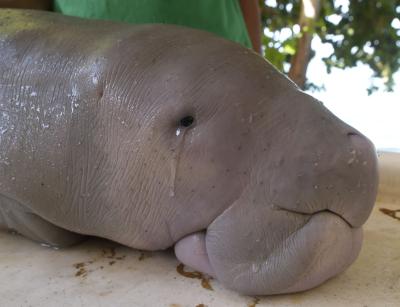 CAPE PANWA: The young female dugong that staff at the Phuket Marine Biological Center (PMBC) have been trying for 10 weeks to nurse back to health has died. The death has come as a shock. On May 17, PMBC staff had high hopes for the dugong’s recovery, and rated her chances of survival as high as 80%. The dugong died three days later. PMBC biologist Kongkiat Kittiwattawong, explained to the Gazette, “We stopped giving her antibiotics because taking them long-term would have damaged her immune system. “She died from pneumonia and encolitis. She went into shock and drowned on the morning of May 20.” The dugong was initially discovered stranded in Klong Pa Khlok, in Baan Para, Thalang, on March 5. She had a large gash near her mouth, was underweight, weak and covered in bruises. K. Kongkiat said that biologists have conducted an autopsy to try to better understand dugong physiology, adding that the remains will be buried.