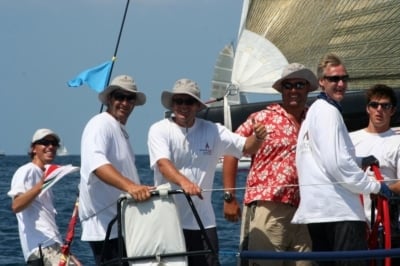 Three-time King’s Cup winner Neil Pryde protested against the race committee after the wrong flag was put on one of the marks on the course as the Racing 1 class results went down to the wire.

Pryde’s boat Hi Fi finished level on points with Toby O’Connell’s Dhevatara Drumstick, but according to regatta race rules the winner is decided on the last race result.

Pryde and his crew on Hi Fi finished fifth in the last race today, while O’Connell finished second, leaving Drumstick as the overall winner before the protest was lodged.

However, Pryde’s protest was dismissed by the jury, giving O’Connell overall first place and the coveted King’s Cup.

The final day started with good wind followed by flat spots of no wind, which led to some boats jumping to a big lead only to stop dead in the water while the rest of the fleet caught up.

There were some upsets in the rest of the classes as the patchy and light winds threw some of the favorites off course.

Peter Dyer had his boat Madam Butterfly floating over the line and into first place overall in the Racing 2 class, while Niels Dgenkolf on Phoenix finished second. Skipper Jonathon Mahony was, well, happy when his boat Happy Endings finished in third place.

Japan’s Kenichi Takahashi pulled off one of the biggest upsets by sailing Motornet into first place overall in the Sports Boats class. Class favorite Scott Duncanson on Somtam Express was relegated to second place overall.

Shuji Hagihara finished third in the class on Just.

There were no surprises, however, in the Firefly 850 class with Marc Cudennec’s Chi Machine finishing first overall after winning four of the seven races. Bill Phelps’ Twin Sharks finished in second place, while Roger Kingdon’s Moto Inzi finished third.

King’s Cup veteran Henry Kaye may have finished fourth in the Firefly class on Mamba, but his old boat The Sting, with Philip Day at the helm, won the Multihull Racing class.

Veteran Thai skipper Radab Kanjanavanit finished fourth in the class on his boat Cedar Swan, which has contested more King’s Cups than any other boat.

PIMEX back on show at Boat Lagoon