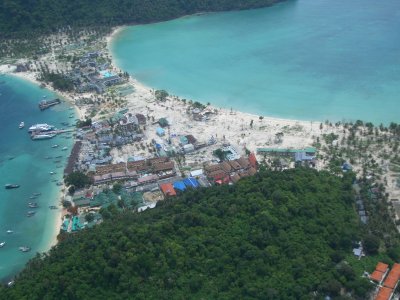 PHI PHI ISLANDS: Phankam Kitithorakul, the Chairman of the Ao Nang Tambon Administration Organization (OrBorTor), which is responsible for the Phi Phi Islands, yesterday called for greater government support because, he believes, the islands are being overlooked in favor of Phuket and Khao Lak.

K. Phankam said that, eight months after the tsunami, the central government had still to help boost tourism to the islands. “It seems that everyone has forgotten Phi Phi; they are focusing only on Khao Lak and Phuket,” he said.

“We have many rooms available on Phi Phi for tourists who want to travel here, especially [on the hillside to the east of Ton Sai Bay], which suffered little damage from the tsunami.

“Many people think that all of Phi Phi was damaged but in fact it was not,” K. Phankam said, adding that the islands were currently attracting about half the usual number of day trippers for this time of year.

“The government is taking too long to choose which organization will rebuild Phi Phi, and now it is as if we are still at the very first step,” he added.

However, K. Phankam did concede that since the tsunami some progress had being made. “At the Cabinet meeting in Khao Lak [on September 5-6] they decided that the Organization for Specific Areas Administration for Sustainable Tourism Promotion (OSAASTP), under the Ministry of Natural Resources and Environment, will rebuild Phi Phi,” he said.

He explained that the OSAASTP will be given the responsibility of maintaining and improving main infrastructure on the islands, including supplying electricity and freshwater, and installing footpaths.

However, he complained that this move was long overdue, and that the decision came only after residents had pressed the central government for years to provide such services in place of private companies, whose services were considerably more expensive.

In the government’s defense, Suwalai Pinpradab, Director of Tourism Authority of Thailand (TAT) Phuket office, told the Gazette, “They [Cabinet] is still waiting for the new redevelopment plans, just as Patong and Kamala Beaches are.”

She agreed, however, that the islands are open for business. “Many hotels and guesthouses [on Phi Phi] have been repaired and are ready to receive tourists. I think there are more than 1,000 rooms available there now.

“I have just been there and it is more beautiful than before, especially at Maya Bay,” K. Suwalai said.

She added that the TAT was already promoting the islands abroad, and that promotion was already having an effect. “A lot of tourists from Australia and the Middle East are visiting there now. We started promoting tourism to Phi Phi and I think that, in the coming high season, the number of tourists there will be about 90% of last year’s figure.”

Students to clean up Kamala Beach