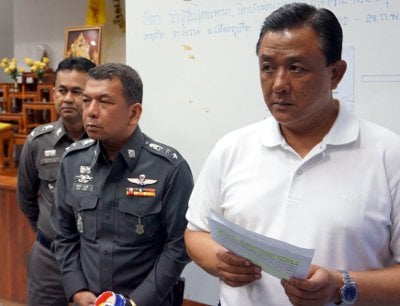 PHUKET: Stein Dokset, the long-term Phuket expat Norwegian charged with the murder of his ex-girlfriend Rungnapa Suktong, has told police that he accidentally killed his girlfriend in a jealousy-fueled rage, police said today.

Mr Dokset was arrested on Tuesday after police found the acid-burnt decaying remains of a human body in his basement bathroom. He later confessed that the remains were that of Mrs Rungnapa, his girlfriend of six years who dumped him for a Patong policeman.

Chalong Police Deputy Superintendent Lt Col Chaowalit Petchsripia told the Phuket Gazette that Mr Dokset and Mrs Rungnapa were together from 2003 to 2009.

“They had many problems in that final year because Mr Dokset found out that Mrs Rungnapa was involved in a new relationship since 2008,” Lt Col Chaowalit said.

“Mrs Rungnapa ran a bar in Patong. She was a partner of that bar,” he added. However, he did not reveal the name or location of the bar in question.

Parichat Sriraksa, a 30-year-old cousin of Mrs Rungnapa, told the Gazette that Mrs Rungnapa left Mr Dokset to marry a policeman stationed in Patong. The couple had one son together, Miss Parichat said. Police have yet to confirm this information as accurate.

“He hid Mrs Rungnapa’s body for two, almost three years in the bin. We are now having DNA tests conducted on the remains to confirm whether or not the body is really hers,” said Maj Gen Chonasit.

“We are using a DNA sample from Mrs Rungnapa’s mother to compare with the remains of her body. Even though Mr Doket confessed that the body was hers, we need scientific proof to confirm the information,” he said.

“I also asked the forensic team to check what kind of chemical was used to dissolve the bones and flesh,” he added.

During the raid on Mr Dokset’s house on Tuesday, police found several bottles of chlorine pool cleaner in the same bathroom where Mrs Rungnapa’s body was hidden.

“Mrs Rungnapa owned the land of the house [where she was killed], some land in Prachuap Khirikhan and some cars. Mr Dokset put her name as the landowner since foreigners can’t own land in Thailand,” Maj Gen Chonasit replied.

Regarding the safe found in the bathroom where Mrs Rungnapa’s remains were found, Lt Col Chaowalit of the Chalong Police said, “We haven’t checked what is in the safe yet. So we don’t know if there is any money or anything inside it.”

“Mr Dokset is now in Phuket Provincial Prison and I have not allowed him to be released on bail because he is a foreigner, he can run away out of the country,” he said.