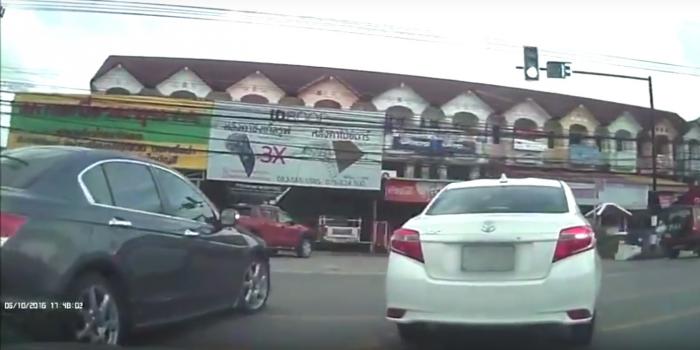 PHUKET: Police filed charges against a diving instructor after his reckless driving was caught on camera yesterday.

A viral video on Facebook titled ‘Please help. Am I in the wrong?’ shows the driver of a Honda Accord attempting to turn right from the left-hand turning lane at the intersection of Chao Fa West and Thep Anusorn Road in Wichit, near the Shell gas station (video here).

The dash-camera video appears to show the instructor, named by police as Tor Por, cutting off the driver, pulling over and threatening him.

Mr Tor appears to be turning right from the left-turning lane, despite the fact that there were two right turning lanes. The dash-cam driver, named on Facebook as Jeerapong Yanasan, initially did not allow Mr Tor to cut him off.

Mr Jeerapong politely explains that the diving instructor was in the wrong lane. Mr Tor then rudely replies, “Don’t teach me the law,” and returns to his car.

He was charged with reckless driving, improper overtaking, dangerous driving and threatening others.