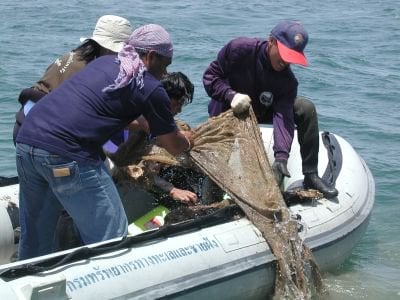 PHANG NGA BAY: Phuket Marine Biology Center officers and volunteers from local dive companies yesterday worked together to retrieve a 300-meter-long fishing net that had become entangled on coral just off Koh Hang. The net was discovered by a PMBC officer on a regular dive to inspect the condition of the coral. A length of about 10 meters was found entangled with the reef. Niphon Phongsuwan, a marine biologist with the Phuket Marine and Coastal Resources Department, told the Gazette that the net was probably thrown overboard by fisherman, causing damage to coral and endangering sea life in the area. The routine dive to inspect the coral was part of a project to preserve coral and marine life. “Reefs also get damaged by some guides who are afraid to warn people not to stand on the coral because they are afraid of losing customers,” said K. Niphon. But he said that most damage to coral is from natural processes. “Other living things such as seaweed take over coral areas, which makes it difficult to restore the coral,” he said. However, he added that it was easier to restore coral that had suffered natural damage than coral damaged by people. “The Phi Phi islands have shallow water, where the coral is easily damaged by tourists’ feet,” K. Niphon said. Another factor, he explained, was the quality of the sea water. “It takes five to 10 years to restore areas like this that have good water, but 20-30 years to restore areas in water that is not so clean,” he said.