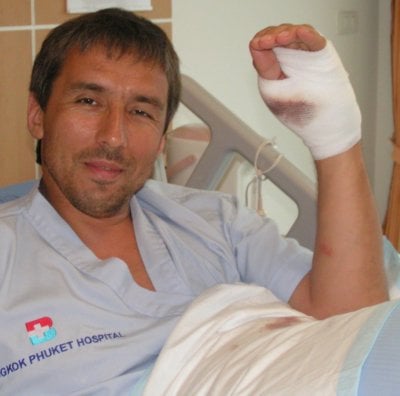 PHUKET: Russian tourist Rustem Teregulov, 39, was airlifted by Royal Thai Navy helicopter from the Similan Islands to Phuket yesterday after he was bitten by a fish – or possibly a moray eel – while diving in the world-renowned national park.

Mr Teregulov today told the Gazette that he was diving off one of the smaller islands about 1:30 pm when the attack happened.

“I saw some sand [shifting] like turbulence, and I swam very close and touched the bottom. That’s when a fish or something came out and bit me,” Mr Teregulov said.

The bite had peeled open the top of his hand.

“I didn’t see the fish. I think it was a barracuda,” he added.

Mr Teregulov, a Moscow businessman, surfaced and boarded the 32-meter power yacht he was diving from and received first aid. Rope was used as a tourniquet to stem the bleeding and his wound was bandaged, he said.

Vice-Admiral Supot Pruksa, of the Third Naval Command in Phuket, said that the Royal Thai Navy received the call for help about 1:55 pm.

However, the pilot could not land at the rendezvous point on Island No 4, better known as Koh Miang, until about 4:15 pm due to poor weather.

Mr Teregulov was flown to Bangkok Hospital Phuket, where he is staying for several days’ recovery and observation.

Chief Petty Officer Rungarun Inthawong, also of the Third Naval Area Command, said that it was likely Mr Teregulov was bitten by a moray eel.

Mr Teregulov, a frequent visitor to Phuket, said the incident would not deter him from returning. “Of course I’ll be back,” he laughed.

In April 2005, 32-year-old Matt Butcher of Stanstead, Essex, in England, had his left thumb bitten off and eaten by a giant moray eel while he was diving at the well-known East of Eden dive site in the Similan Islands. Click here for full story.