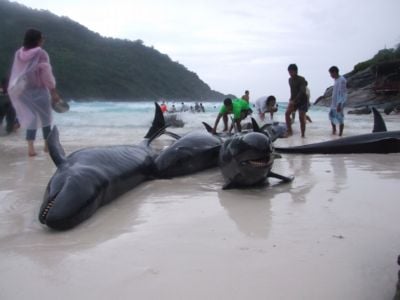 KOH RACHA YAI: Researchers at the Phuket Marine Biological Center (PMBC) are today examining the remains of a False Killer Whale that was one of some 20 that beached on Koh Racha Yai, some 25 kilometers south of Phuket, late yesterday afternoon.

Local hotel staff and tourists rescued another 10 beached animals that could not make their way back to deeper water on their own.

False Killer Whales are large “open-ocean dolphins” known to attack and kill other cetaceans with their distinctive array of 44 teeth.

PMBC biologist Kongkiat Kittiwattanawong told the Gazette that about 40 dolphins were spotted about 5 pm in the shallow waters off Ao Paktok, where 11 of them later beached.

“Almost all the whales that came ashore were three to four meters long. The longest was 4.2m,” K. Kongkiat said.

As most of the whales appeared healthy, it was very unlikely that the mass beaching was the result of illness, he added.

“They are social animals that live in large groups and all members obediently follow their leader, so if the leader beaches the others follow,” he said.

The animal that died was a 2.8m female, probably about 10 years old, he added.

“The animal went into shock and we couldn’t save her. There were no visible signs of illness. We will do an autopsy this afternoon,” he said earlier today.

K. Kongkiat said the leader may have become confused trying to negotiate a narrow channel and found itself unable to return to deeper water due to big waves and strong onshore currents.

The 10 stranded dolphins were taken by truck to the relatively calm waters of Ao Teua on the other side of the island, where they were given injections to prevent infection and released around midnight.

“After their release they seemed to gain strength. That was the last time we saw them, though we continued to patrol the shoreline by boat,” K. Kongkiat said.

False Killer Whales typically live for about 50 years and are seldom spotted close to the shoreline, he added.

There is a healthy population of the dolphins in the Indian Ocean and they can be seen off the coasts of Burma and Bangladesh, as well as Thailand, K. Kongkiat explained..