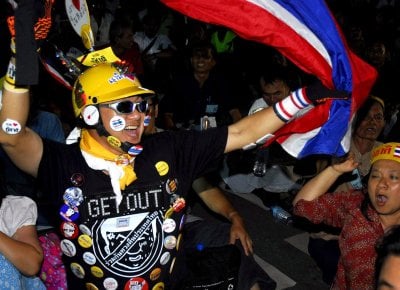 PHUKET: The island’s Democrats have announced that they will boycott new elections called for April 23 because they are not satisfied with Caretaker Prime Minister Thaksin Shinawatra’s pledge not to accept the post of Prime Minister in the next Parliament.

In a dramatic speech broadcast live last night by all TV channels, the PM announced that he would not be Prime Minister in a new Parliament, but that he would continue to be an MP and leader of the Thai Rak Thai (TRT) party.

This has raised concerns among his opponents that any TRT Prime Minister would be a puppet, with Thaksin pulling the strings.

Former Democrat MP for District 2, Chalermlak Kebsup, told the Gazette this morning, “We have to examine this more closely. PM Thaksin has said he will resign after Parliament convenes, but right now he is still the PM. People may believe that all the problems have been solved, but if you think about it nothing has changed.

“What the PM did last night was for his own benefit. Ordinary people who do not understand politics in depth will have seen his announcement and will admire him. But last night, as I was listening to him, many people called me to ask, ‘What does it mean?’

“He said that he would continue to push TRT policies [after stepping down], so that means nothing has changed.

“If he is sincere [about resigning] it will be good, but if he is simply maneuvering for position, things will get worse because he will be able to shift blame onto the new Prime Minister.”

“In fact, the PM and the entire Cabinet should quit, making way for a royally-appointed interim Prime Minister to take over running of the country,” she added.

One of the leaders of the People’s Alliance for Democracy (PAD), Sondhi Limtongkul, remained suspicious after Thaksin’s announcement. He was quoted by Bangkok media as saying that he was “25% satisfied”. The PAD would continue to oppose Thaksin as long as he remains in the Prime Minister’s chair, he said.

As things stand, Thaksin will remain in the chair until the new Parliament is convened and a new PM can be elected by MPs. Just when that will happen is not clear; if opposition parties continue to boycott elections, the likely result will be a repeat of the April 2 poll, which left dozens of provinces – including Phuket – without MPs. Without enough MPs nationwide, Parliament cannot be convened.

On April 2, local TRT candidates Dr Sriyada Palimapan and Wisut Santikul both failed to garner the minimum 20% of all eligible votes required to take a seat in parliament, as required by election law in the case of candidates running unopposed.

Both have confirmed that they will run again in the April 23 poll. Dr Sriyada, who is the TRT’s party leader in Phuket, said this morning, “The TRT in Phuket must continue its work. We will continue to do our duty as members of the party.”

Commenting on Thaksin’s announcement, she said, “I think this will improve the political atmosphere. The skies will become clearer.”

Such clarity may not be that easy to come by, however. For the present, a standoff continues: Thaksin will not vacate the PM’s office until a new Parliament is convened and the Democrats will continue to boycott elections until he steps down, which will mean no Parliament can be convened.