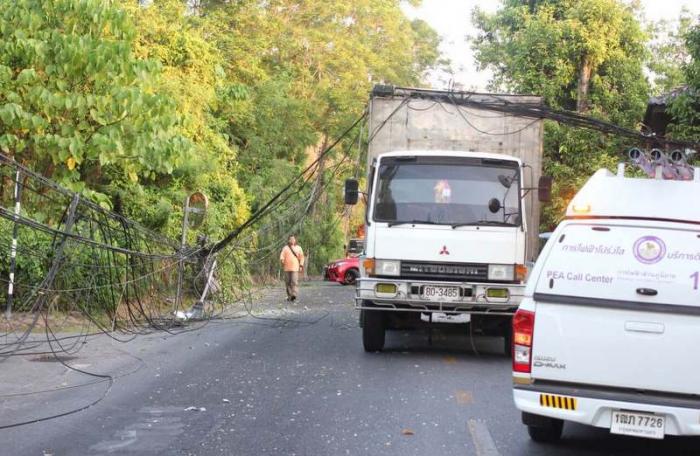 PHUKET: A fish delivery truck left a trail of destruction down a back road in Rassada yesterday morning when the high-sided vehicle snagged overhead power lines and pulled down a row of five electricity poles like dominoes. Meanwhile, the oblivious driver charged down the road towards his depot.

Caught up in the entanglement and lucky to escape serious injury was Nopporn Chooklinoon, a 60-year-old motorcyclist who was catapulted over the wall of a judge’s residence situated along the soi.

The rider, following the truck and riding over the downed power lines, was suddenly lifted into the air and thrown over the wall as the truck continued down the road and pulled the downed wires tight again.

The 10-wheeled truck belonging to Chokpanuchit Co was driven by Nopparat Ayutthaya, 48, who was returning to the depot in Rassada after an overnight trip delivering fish in Bangkok.

The truck driver claimed not to have noticed the cables until his truck refused to go any further.

“When the truck stalled I looked back and saw all the electricity poles lying on the road,” he said.

Bystanders, seeing a motorcycle lying on its side among the debris of snapped-off tree branches and electricity poles strewn about, took some time to realize that the motorcycle rider was nowhere to be seen, until his cries for help from the other side of the 6ft wall alerted them.

Mr Nopporn was carted off by medics to Vachira Phuket Hospital but apparently suffered no broken bones, despite being thrown at least two meters into the air and landing on the judge’s lawn several feet from the wall.

The Provincial Electricity Authority (PEA) were soon on the scene to re-erect the power poles.

Lt Ronnaphum Permpoon of the Phuket City Police said they are still contemplating charges for the truck driver, which could include reckless driving, causing damage to property and causing injury.