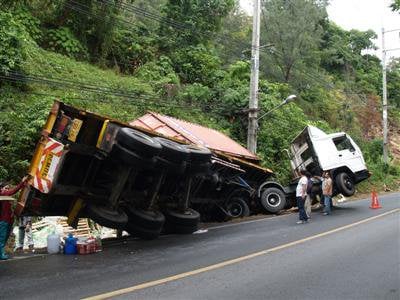 PHUKET: A tractor-trailer carrying 27 tons of building materials ended up in a roadside drainage ditch Wednesday afternoon after the driver decided to crash rather than risk hitting other vehicles.

The 22-wheel rig was on its way from Bangkok to Patong with a shipment of ceramic tiles to be used on a building project at the Baan Laimai Beach Resort.

At around 4pm, 37-year old driver Tinnakorn Phonboon was trying to get the 320-horsepower tractor to pull the flatbed and its 27-ton container load of ceramic tiles up a steep section of the Kamala to Kalim Road.

The rig almost made it, but just before reaching the crest the force of gravity won out and the truck started to roll back down the hill.

Mr Tinnakorn later told the Gazette he was unfamiliar with Phuket roads. He said he decided to back into the drainage ditch and crash into the nearby embankment to bring the rig to a halt.

“There was a long line of small cars following me. If I had let the truck roll down, those cars would have been damaged. So I decided it was better to hit the hillside instead,” he said.

Mr Tinnakorn had a word of caution for people driving behind large vehicles on steep hills.

“Don’t follow too close behind. Try to keep some space between you and them,” he advised.

The following morning the ceramic tiles were delivered to the resort by a six-wheeled truck.