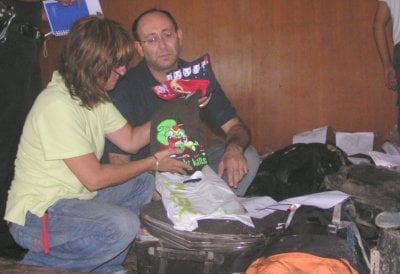 PHUKET AIRPORT: Forty-eight hours after the ill-fated One-Two-Go flight OG269 crashed at Phuket International Airport (PIA), killing 89 of the 130 people on board, the cause of the disaster is still unknown and 33 corpses of foreigners remain unidentified.

Phuket Airport Director Sq Ldr Pornchai Eua-aree told the Gazette that there is no problem with the runway and that the accident was not caused by the runway itself, although it will be some time before the reasons for the disaster are known.

About 120 flights had to re-routed to Krabi Airport, with Phuket-bound passengers having to travel the remaining distance by bus or van. Phuket Airport reopened for service at 4 pm yesterday.

“We haven’t had to cancel any flights yet, and we are ready to welcome Asian tourists who are coming here for the Vegetarian Festival,” added K. Pornchai.

In a broadcast on The Nation TV channel last night, Lt Gen Amporn Juruchinda, commander of Police Forensic Science in Bangkok, said the total number of bodies recovered from the wreckage was 89, of which 35 were Thais and 54 foreigners.

It was announced today that Phuket Provincial Internal Trade Office Chief Somphot Sangkhapong was among the dead.

The bodies of the Thai victims have all been identified by relatives, while the body of Indonesian pilot Areef Mulyadi is the only foreign corpse so far to have been transported home by relatives.

Relatives of Thai victims wishing to transport bodies home should take a copy of the victim’s ID card and death certificate (already issued to families here in Phuket) to claim the body.

Relatives of foreign victims should provide as many items of identification as possible.

At Phuket Airport Hall today, a group of Israeli forensics experts was working to identify the bodies of six Israeli tourists who died in the crash. All six victims were expected to be identified and flown back to Israel later today.

The money was delivered on behalf of HM The King and Queen Sirikit by Phuket Governor Niran Kalayanamit this afternoon.

The Phuket Tourist Association (PTA) and the Phuket Hotel Association (PHA) have provided 70 hotel rooms at 20 hotels free for relatives of the victims.

Death toll at 89, all bodies recovered