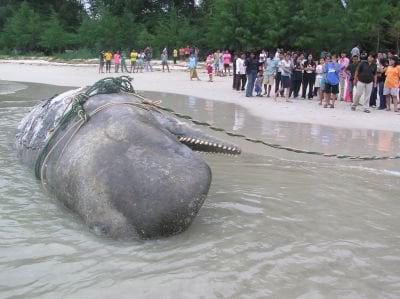 NAI YANG: A dead sperm whale washed up on Nai Yang Beach last night. The whale, 10 meters long and weighing around 3 tonnes, is thought to have been about 40 years old when it died,. Kongkiat Kittiwattawong, a biologist at the Phuket Marine Biological Center (PMBC) in Cape Panwa, told the Gazette, “It was impossible to determine very much about the whale, but I estimate it died around two weeks ago. “Its tail was missing and it was generally quite badly decomposed – too badly to ascertain the cause of death or even its sex.” K. Kongkiat speculated that sharks were among the creatures that had started to eat the dead whale. The carcass was cut up and buried but the skin and teeth were removed by PMBC staff for further study.