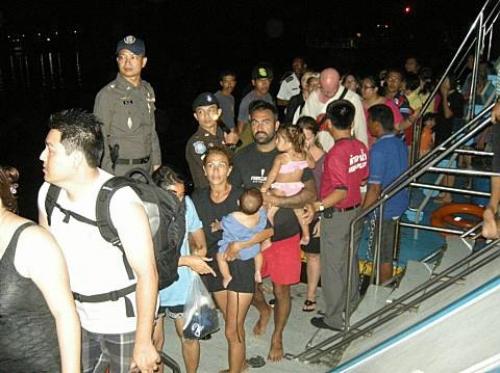 PHUKET: Efforts are underway to recover the ferry Puean Foong II, which started taking on water in heavy seas yesterday afternoon with more than 100 tourists on board (story here).

“Big waves hit the boat. The hull cracked and the back of the boat started filling with water,” Mr Samphan said.

However, Mr Samphan stressed that the boat did not sink, as reported by some news agencies.

“The whole boat did not sink, like some news reports said. Only the back of the boat became partially submerged,” he added.

As the vessel struggled in the large waves, another tour boat, the Pichamon, stopped and rendered assistance, taking the Puean Foong II passengers safely on board.

Pichamon captain Decha Choleam told the Phuket Gazette that when his boat pulled alongside, all passengers on the Puean Foong II were wearing life jackets.

“It took about 30 minutes to rescue all of them,” he said.

“We dropped off our 66 passengers at Phi Phi Island first, then brought all the rescued tourists back to Rassada Pier,” said Capt Decha.

Mr Samphan of Friendship Sea Tour explained that local fishing boats had been called to assist in the recovery of the ferry, which was beached on Koh Keow (Green Island) as a precaution.

“We will fill 30 200-liter oil barrels with air and tie them to the ferry to help keep it afloat while we tow it back to Phuket,” said Mr Samphan.

“We have no idea how long the repairs will take, but we will have them done as quickly as possible. All the tourists understood what happened was an accident, and we have not received any complaints,” he said.

Australian ‘Couple on the Run’ to tackle Laguna Marathon