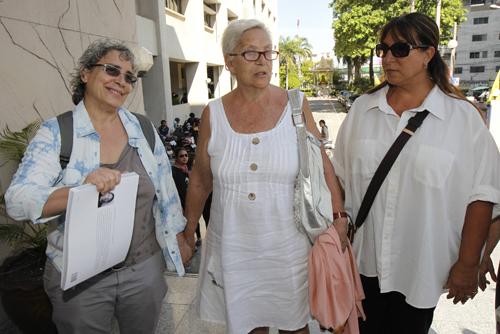 PHUKET: An Italian photojournalist who was shot dead in Bangkok while taking pictures of a military crackdown on an anti-government protest in 2010 was killed by a bullet fired by a soldier, a Thai court ruled today.

Fabio Polenghi, 48, was killed on the morning of May 19 when troops moved in to disperse “red shirt” supporters of former Prime Minister Thaksin Shinawatra who had been camped in the centre of the capital for weeks, demanding an early election.

“The court ruled that orders given by Prime Minister Abhisit and Deputy Prime Minister Suthep that day led to Fabio’s death,” Karom Ponthaklang, a lawyer for the journalist’s family, told reporters.

“It is clear from the evidence that the bullet used was the kind used by Thai troops. We are satisfied with the verdict.”

He added that he would ask the Department of Special Investigations, part of the Justice Ministry, to press charges against Abhisit Vejjajiva and Suthep Thaugsuban.

Abhisit is now leader of the opposition and the government is led by Thaksin’s sister, Yingluck Shinawatra, who won an election in July 2011.

Elisabetta Polenghi, one of Fabio’s sisters, told reporters that those ultimately found responsible for his death should be “at least the person leading the operation on the ground”.

The ruling could spell further trouble for Abhisit and Suthep, who were charged last year with giving orders to use live ammunition that led to civilian deaths and have a number of similar cases pending against them.

If found guilty, they could face the death penalty or life in prison. Abhisit has defended his order to use live ammunition, saying the protesters’ refusal to negotiate had left his government with few options.

Suthep headed the Centre for the Resolution of the Emergency Situation, a crisis control centre that authorised “live fire” zones during the protest and used emergency powers to shut down radio stations, a television station and websites.

More than 90 people, including two journalists and members of the security forces, died during the two months of unrest in the Thai capital. Reuters cameraman Hiroyuki Muramoto, 43, was killed by a high velocity bullet to his chest during clashes between government troops and protesters on April 10.

A Truth for Reconciliation Commission set up by Abhisit’s government to investigate the clashes released a report last year that laid blame for the deaths on the military and on a shadowy group of gunmen dressed in black who mingled with the protesters and fired at troops. They were presumed to be on the side of the protesters.

The Thai military has a long history of intervention in politics and ousted Thaksin in a 2006 coup. The populist billionaire, who retains strong support and political influence, has been living in self-imposed exile since being sentenced to a prison term for graft.