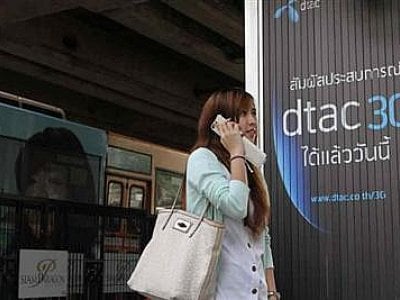 PHUKET: Mobile phone service provider DTAC has announced that it would waive a 48-hour service fee for 1.8 million customers in Phuket and six other southern provinces, after the second service interruption in less than three weeks.

Dtac Chief Corporate Affairs Officer Dr Darmp Sukontasap announced the waiver after a three-hour service interruption on the evening of January 5 that affected 900,000 customers in Phuket, Chumphon, Surat Thani, Trang, Krabi, Nakhon Sri Thammarat, and Phang Nga. Some users in other parts of the country were similarly affected.

The service interruption started at around 3.30pm that day. The company found that its Mobile Switching Center (MSC) in Surat Thani province was ‘under-performing’ and the call success rate of Dtac customers in affected areas had dropped to around 50-60%, resulting in congestion in the Dtac network and causing over 1.8 million customers to have difficulty in dialing out or receiving calls.

Dtac was able to resolve the problem at around 6.45pm and the situation gradually returned to normal at around 8.30pm on the same day, with the call success rate returning to the 98-99 per cent range.

The company says it will compensate its estimated 1.8 million affected customers by waiving the service fee for 48 hours starting from noon on January 4.

“In an effort to prevent a recurrence of a similar service interruption, Dtac has also decided to temporarily suspend all its system upgrade exercises and to work closely with Ericsson (Thailand) Ltd, its vendor, to re-examine all the processes and procedures of the exercise. This may cause a slight delay in the company’s system upgrade effort, but it will help ensure that the risk of future service interruptions is minimized and that, in the longer term, Dtac will be able to provide the best possible products and services for its customers,” he said.