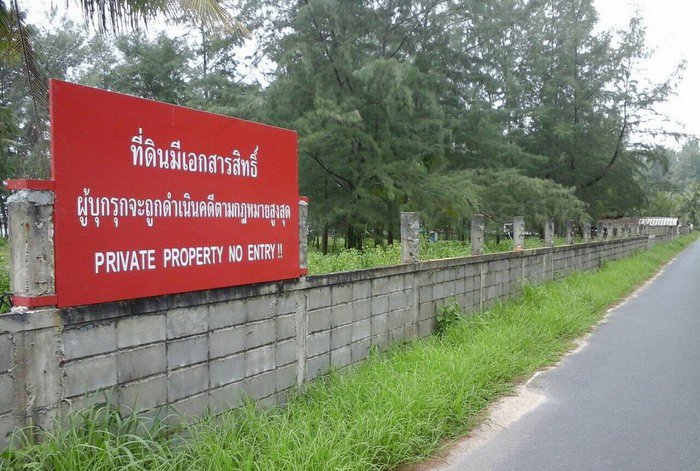 PHUKET: The Department of Special Investigation revealed yesterday that about 200 rai of prime Phuket beach front property had allegedly been encroached on along Lephang and Layan Beach.

“There were barriers constructed around about 200 rai of land along the beaches. We have estimated the loss of government land to be valued at about 14 billion baht,” said Department of Special Investigation Deputy Director Pong-In Intarakhao.

“According to aerial photographs, their has been a great amount of soil and sand deposits as the sea moved further and further from the original high-tide marker. The alleged property owner then used a flying Sor Kor 1 to secure a Chanote to take possession of the land.”

Flying Sor Kor 1 are title deeds that have been legally issued for a specific plot of land, but are then applied to another plot.

The Department of Special Investigation provided the aerial photos to support their assessment of the situation in a presentation to government officials. However, they declined to name the Chanote holder.

“After securing the Chanote, they built a wall blocking the public from entering and posted signs saying that it was private land,” said Lt Col Pong-In.

Col Pong-In insisted that it was impossible for the land to be privately owned, as a public road was located along the beach which was the dividing line between what was public land and private land.

“Because of this marker, it is easy to see that the new land that appeared was on the ‘public’ side of the road and is therefore public land,” said Col Pong-In.

“We would like the provincial government to reclaim the land for the public. However, we will keep our eyes on the case, and if there are any hangups we will move in and assist,” Col Pong-In said.

Officers have “beef’ with illegal meat from Malaysia