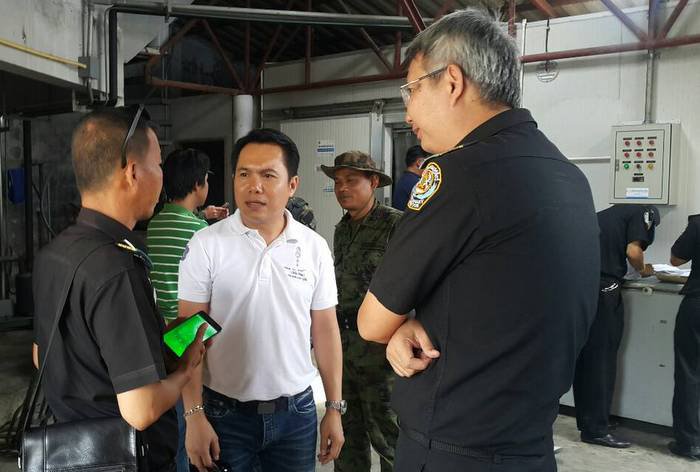 Backed by Navy personnel and Phuket City Police, Kasichon Choungchot, veterinary inspector from the Department of Livestock Development in Bangkok, led the raid on the house on Soi Siang Tai.

“We called the homeowner, but nobody answered. So, the Navy officers decided to break into the warehouse in the back yard,” said Mr Kasichon.

“We finally were able to find the owner, Somboon Intarat, 55. He confessed to police that he had lied about sourcing the meat from a Thailand slaughterhouse,” Mr Kasichon said.

“He had actually received the meat from an unknown merchant who brought the meat up from Malaysia.”

Mr Somboon has been charged for importing meat into Phuket without the permission of the Livestock Office in accordance with the Animal Epidemics Act. Additionally, he will be charged for using a fake licence to sell or own commercial meat.

The beef remains in a sealed warehouse and will be destroyed, confirmed Mr Kasichon.

The maximum penalty for transferring an animal or animal products without permission is a 10,000 baht fine, six months in jail, or both.

“This arrest is part of our department’s campaign to carve illegal meat out of the market in Thailand,” Mr Kaischon said. “We don’t want people getting a virus or bacterial infections.”