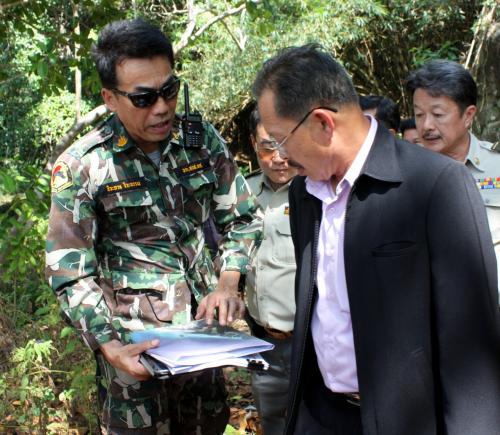 “So far we have investigated the land documents of 14 plots of land and found that all were issued illegally. So far, we have asked police to press charges against five of those involved,” Sirinart National Park chief Cheewapap Cheewatham told Mr Manopat.

Mr Cheewapap repeated the latest development from five months ago. That at last report, on September 7, he filed a complaint to Cherng Talay police against the fifth land owner for allegedly encroaching on the national park (story here).

However, Mr Cheewapap yesterday did not explain whether or not any further action had been taken against the remaining nine land owners accused of encroaching on the park. He also did not provide any update of police progress in pressing charges of encroachment against at least the five already accused.

Mr Cheewapap did explain that aerial photographs of the 14 plots of land under investigation had been compared with the land title deeds for those plots, showing that the encroachment had came about through “Flying Sor Kor 1” or “Sor Kor Buwam” techniques.

Flying Sor Kor 1 are title deeds that have been legally issued for a specific plot of land, but are then applied to another plot of land elsewhere.

Sor Kor Buwam, buwam being the Thai word for “swollen’, is used to describe title deeds that have maintained the relative dimensions of the plot boundaries, but illegally expanded to cover more land, hence illegally attempting to occupy more land than legally registered.

“We are now going to continue to investigate suspicious land title deeds for about 1,400 rai of land in the national park,” chief Cheewapap added.

However, the plan to bring down a 366-strong DNP investigation team from Bangkok to help in the investigation has been cancelled, confirmed Mr Manopat.

“The 366 investigators will not be joining us from Bangkok (story here). We are now in the process of putting together a new team of officers from Surat Thani, Nakhon Sri Thammarat and Songkhla,” he said. “To facilitate the work of the team, DNP will provide a budget of 4 million baht.”

During his visit yesterday, Mr Manopat inspected several of the sites believed to be encroaching on Sirinat National Park.

“Although we will face many obstacles, the raids will continue. Currently, about 30 per cent of the land in the national park has been stolen by investors. If we continue to ignore this problem, soon the only land left in the park will be what is below the park office and the sand on the beach,” he said.