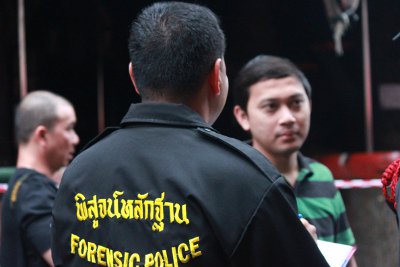 PHUKET: The Royal Thai Police Institute of Forensic Medicine in Bangkok has confirmed that the fourth – and last – victim to be identified from the Tiger Discotheque fire in Phuket on August 17 is that of French tourist Emmanuel Becard, aged 30.

Friends of Mr Becard reported him as missing the day after the fire, which killed four people.

One of Mr Becard’s friends said he recognized the watch on one of the bodies. However, police were unable to positively confirm the victim’s identity based on that evidence alone.

Patong Police Deputy Superintendent Kittipong Klaikaew explained to the Phuket Gazette that positive identification of Mr Becard was made through matching DNA tests conducted in France with tests performed in Thailand.

“The officers at our institute contacted the mother of Mr Becard and asked her to send DNA lineage test results to Thailand so that they could be compared with the DNA test results from the body,” said Lt Col Kittipong.

“The results from the two independent tests were a 100-per-cent match,” he said.

The two other victims of the fire previously identified through DNA tests were Thai nationals Duangporn Budklor, 34, and Nipaphat Sudtasorn, 36.

The body of British tourist Michael Tzouvanni, 24, was confirmed by dental records provided by the family.

Lt Col Kittipong said that police have yet to file any charges against the operators of Tiger Discotheque.

“We have questioned many people involved in the case, but we still have more to question regarding the building. We specifically want to question some officers from Patong Municipality. We have contacted them twice, but no one has shown up for the appointment. We will take care of this as quickly as possible,” Lt Col Kittipong.

“As for determining the cause of the fire, we still have to wait for the results from Office of Forensic Science. I believe we will get the results back soon,” he added.

All silent on “insecticide’ causing deaths of Canadian sisters