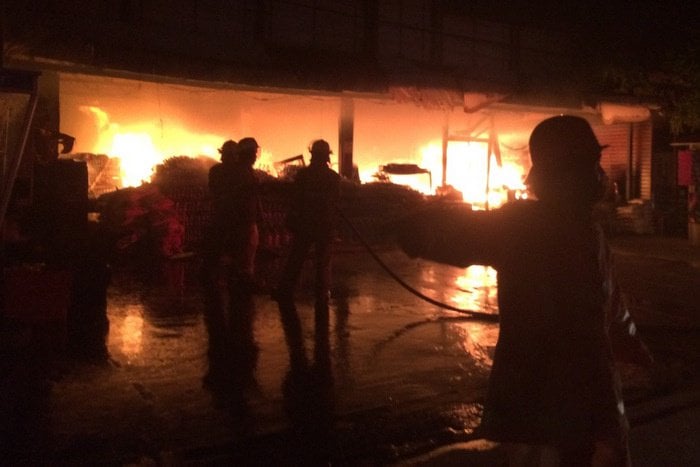 PHUKET: Staff and customers fled for their lives early this morning as flames engulfed a SuperCheap mini-mart store in front of the Phuket Villa 5 housing estate on Chao Fa West Road.

“One of the staffers said that there were about 10 customers in the shop when they noticed flames coming from a fridge,” said Lt Col Peerapan Meemak of the Wichit Police.

“The flames then set alight candles, incense and firecrackers, which prompted the staff and customers to flee for their lives.”

Six fire trucks were dispatched at 2:30am to fight the fire, which eventually gutted the store.

“Firefighters took about an hour and a half to douse the blaze,” said Col Peerapan. “They had to break through the wall of the fish shop next door to make sure they could put it out.”

While firefighters battled the flames, residents in nearby houses were told to evacuate their homes for safety.

“We asked them to take only what valuables they could carry and quickly exit their homes,” Col Peerapan told the Phuket Gazette.

At this stage, police believe that an electrical short circuit in the refrigerator started the fire.

“However, we will have the fire investigation team inspect the scene to confirm the actual cause of the fire,” Col Peerapan assured.

The cost of damage by the fire was estimated at about 5 million baht.