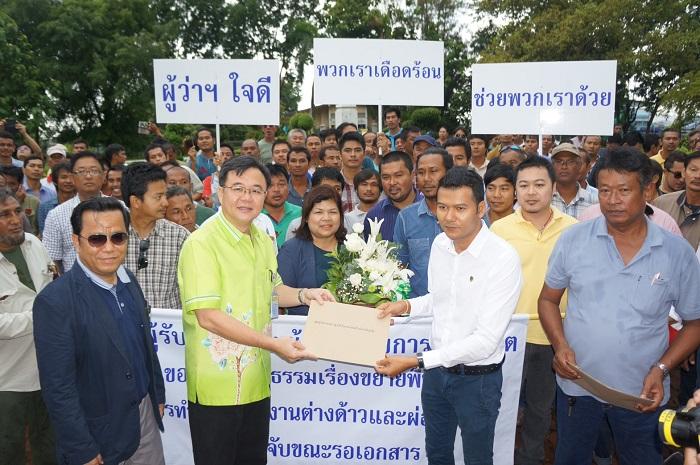 PHUKET: A crowd of more than a hundred local employers of migrant workers gathered this morning at Phuket Provincial Hall to protest difficulties registering workers under their employ.

A representative of the group, Wirachai Saddom, handed a letter of complaint to Phuket Vice Governor Kajornkiet Rakpanitmanee at 11am, demanding fair treatment of migrant workers and their employers while they are being registered.

However, employers and migrant workers have also been subjected to raids and arrests by officers from the PPEO and other departments while their applications are being processed (story here).

Panuwat Prompechr, who employs about 30 migrant workers, said this morning that he and his crew have no problem following labor laws, but was frustrated by the lack of transparency and confusion over the procedure for registering his workers.

“I submitted all the necessary documents to make everything legal, but according to our broker, officers at the labor office say the documents are incorrect. I asked my broker what to do and was told to simply stop working. How is that possible? We can’t just stop working when the officers will not help us to make our workers legal,” said Mr Panuwat.