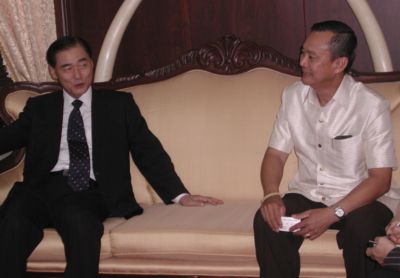 PHUKET: South Korean Ambassador Han Tae-Kyu met Phuket Governor Niran Kalayanamit yesterday to discuss the thorny issue of Korean tour guides working illegally in the province, but with few tangible results other than an agreement “to compromise”on the issue.

Meanwhile, the terms of a proposed Memorandum of Understanding (MOU) to be signed by Korean tour operators in Phuket are under review and a planned testing of some 300 Thai tour guides for Korean-language ability in is on hold until further notice.

Gov Niran explained to Ambassador Han that working as a tour guide in Thailand is restricted to Thai nationals.

However, both men accepted that there are too few Thai tour guides with Korean-language abilities to meet demand, which has resulted in many Koreans working illegally as guides or “interpretors” to help fill the gap.

As a result, Thai guides often serve as “sitting guides” – in case of a check by police or other officials.

Formally allowing Koreans to work as “interpretors” with a Thai guide present was considered a possible solution to the problem, though it was not mentioned whether the MOU under review would include such a clause.

Ambassador Han said that most Korean tour operators in Phuket would like to save the expense of hiring Korean guides, but that the local guides simply lacked the language skills to keep Korean tourists informed and entertained.

“We want to have Thai guides, but they must be able to do the job properly,” he said.

The revised terms of the draft MOU would be made available to the Korean Consulate in Phuket to ensure fairness and Korean tour operators would not be asked to sign until that was the case, Gov Niran said.

The original MOU required all tour operators serving Korean tourists to employ Korean-speaking Thais as guides. Only a handful of Korean tour operators were prepared to sign the MOU presented at a meeting on July 14 that was attended by only eight of 57 such firms.

Another complaint from Thai guides about their Korean counterparts was that they lack sufficient knowledge of Thai culture and history to pass this knowledge on to tourists, Gov Niran told Amb Han.

Gov Niran also asked whether there was a problem of Thai tour guides working illegally in Korea, to which Ambassador Han replied that he didn’t think so, but that he would have to check to be sure.

Phuket Governor’s Office Chief Rapeepat Na Nakorn and his team have been assigned to revise the MOU, which will not be signed until it satisfies all parties, including the Korean diplomatic mission in Thailand, Gov Niran said.

Meanwhile, the provincial government and the Professional Guide Association (PGA) will move forward with a plan to test the Korean-language skills of about 300 of the 2,000 registered Thai guides in Phuket. However, the test has been postponed until further notice. It was originally scheduled for August 29 and 30.

After the meeting, Amb Han told the Gazette that the Korean Embassy was happy to help, but that any resolution must be worked out between the provincial government and the PGA.

“The most important point is tourist satisfaction, so it is up to the guide association to provide the quality of service expected by Korean tourists,” he said.

During the meeting Amb Han said that Thailand is a primary destination for Koreans, with about 1.1 million Koreans visiting the country annually.

More than 200,000 Koreans visited Phuket last year – more than any other Thai destination after Bangkok. There are currently 16 direct flights from Korea to Phuket weekly, with an average daily passenger load of about 600, Amb Han said.