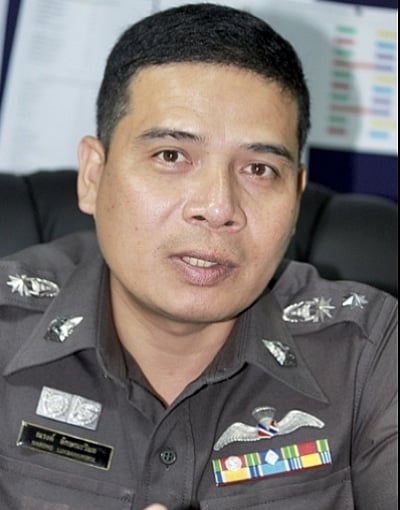 PHUKET: CHALONG Police are boosting public safety on the southern streets of Phuket by enlisting the help of local government officers, volunteers, and other island residents, business people.

Chalong Police Deputy Superintendent Narong Laksanawimon told the Gazette that more than 20 officers from Rawai Municipality and local residents are joining police efforts in patrolling the streets, reporting any suspicious activities they see directly to officers on patrol at the time.

A “neighborhood watch center” has also been set up in the Khok Tanode community in Chalong. The center, located near Ladthiwanaram Temple (Wat Tai), has 10 volunteers, supervised by police.

“We will ask for more officers from Chalong Municipality to join the campaign,” Lt Col Narong said.

“After just two weeks, it already seems as if the number of robberies in the area is decreasing. So far, the center’s efforts have led to arrests in five cases,” he added.

The move to enlist civilian help aims to curb rising crime in the area. One recent incident involved a man being robbed in Soi Sammakee 2, in Rawai, on June 29 by a couple wielding a machete.

“The man was robbed by a guy and a girl who approached him on a motorbike. He thought he might know them,” the Gazette was told by one local resident.

“They then put a machete to his throat, slightly cutting his face, and he just gave them everything. He filed a police report and a policeman told him there’s a gang operating in the area,” said the resident.

“Another friend warned me she was followed from 7-Eleven up past Soi Sammakee earlier this month by some Thai guy trying to get her to stop her bike,” the resident added.

Lt Col Narong told the Gazette that police were aware of that incident.

“We know who the man is. He is known in the area for being involved in drugs. We believe he is no longer in Phuket, but we are working toward his arrest,” he said.

Yet the extra number of police to patrol from 9pm to 3am each day offers little respite for the Chalong Police, who have the three subdistricts of Chalong, Rawai and Kata-Karon to protect and serve.

“Before [Maj Gen Chonasit’s order] we had only 12 patrol officers, but since the announcement we have six more… But that means we have only 18 patrol police in total to cover Chalong, Rawai, Nai Harn, Kata and Karon. That means only two officers in each subdistrict per shift,” explained Col Narong.

“Kata and Karon [where Mrs Smith was stabbed] should have more patrol officers,” he added.

Being awarded more patrol officers has been an ongoing battle for the Chalong Police. “Every year we ask for more police, [but] this year we received [only] four more officers,” Col Narong said.

The move to involve “community policing” also has its limits, as the volunteers and local government officers will finish their duties at 1am.

“This leaves us with the same very small number of police officers to maintain their patrols from 1am through to the next day, which is when most of the crimes are committed,” Col Narong pointed out.

According to police statistics, most of the crimes committed in Rawai are break-ins, while bag-snatching remains prevalent in the Kata-Karon tourist areas.

Meanwhile, Gen Chonasit at a press briefing said that most crimes in Phuket were perpetrated within the Chalong Police’s jurisdiction.

Col Narong told the Gazette that he foresaw no change in the trend.

“Phuket attracts many people who come here to make money, either to find work or earn a higher salary, but when they lose their jobs or don’t make enough money, they turn to crime,” he said.

“In my opinion, with the economy going the way it is, Phuket will only attract more criminals,” he concluded.

Phuket Sports: A look ahead to this weekend’s action