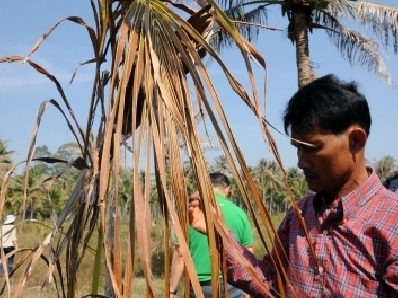 PHUKET: Phuket grocers are struggling to keep coconut products on their shelves amid a nationwide shortage due to drought and an insect infestation in the heart of Thailand’s coconut country.

Supermarket giants Tesco Lotus and Big C both told the Phuket Gazette that their orders for coconut milk – a main ingredient in many Thai foods, especially desserts – are not being filled.

Ittipol Klasuk, dried food manager at Big C Phuket said, “We order coconut milk from Amphol Food Processing [distributors of Chao Koh and Roi Thai products] every three days, but they often cut our order. For example, we order 100 and get 25. And when we do get product on the shelves, people come and buy it up quickly, in bulk.”

The price of coconut milk in supermarkets has yet to reflect the increase in wholesale prices, both Tesco Lotus and Big C report.

This has not been true for small vendors in public markets that rely on fresh coconuts to make products. The price of these coconuts has skyrocketed from seven baht in July 2010 to 20.5 baht late last month.

Narunat Mongkol, head of public relations and marketing at Amphol, told the Gazette that they are currently unable to source enough coconuts domestically to fill orders and have begun importing from Indonesia.

The source of Thailand’s coconut woes is the meager Brontispa longissima, commonly known as the coconut hispine beetle.

The tiny stature of the insect, however, speaks nothing of its ability, in numbers, to devastate an entire industry.

Making its appearance in the middle of a two-year drought, the beetle has managed to severely damage or destroy more than 150,000 rai (about 35 per cent) of coconut plantations in Thailand’s southern Prachuap Khiri Khan province, according to Samri Chankird, a researcher with the provincial Agriculture Extension Office.

Prachuap Khiri Khan is known as the “coconut basket” of Thailand as it is by far the largest producer of coconuts in the country. The Ministry of Agriculture estimates last year’s coconut production for the province at over 425,000 tonnes, nearly double that of Chumphon province, Thailand’s number two producer.

This year’s figures are expected to be much lower.

According to the Food and Agriculture Organization (FAO), Brontispa longissima is native to Indonesia and was spread throughout the Southeast Asia-Pacific region in ornamental palm shipments.

The pest attacks more than 20 species of palm, with coconut being “the most favored host”, the FAO says. The beetle feeds on seedlings and the young leaves of mature coconut palms and can quickly destroy an adult tree.

At the forefront of the fight against the infestation is a research team from Kasetsart University in Bangkok working together with Amphol and the Ministry of Agriculture. Team leader Assistant Professor Kosol Charernsom has been testing a number of biological methods to combat the infestation over the past two months.

One such method is the use of Beauveria bassiana, a fungus that has proven effective as an insecticide. When the beetle comes into contact with its spores, they germinate and grow inside the insect, killing it within days. The fungus then emerges and spreads from the carcass.

Another weapon in the assault is Eocanthecona furcellata, a predatory “stink bug” being introduced by Prof Kosol’s team in “nurseries” throughout Prachuap’s coconut plantations to kill off the beetle.

A third method being used by the team is the parasitic Asecodes hispinarum insect, which is a natural enemy of the beetle, attacking it in the larval stage.

The team is having success in the testing phase and they are confident that the methods being used will eliminate the pest, enabling trees to recover and farmers to plant the new Coconut Sawi Number 1 hybrid, which is more resistant to drought and infestations, Prof Kosol said.

The hybrid, however, does nothing for the short term. “We could plant this new hybrid, but each tree takes five to eight years to mature. It’s more drought and insect resistant, and has better yields, but that will not help us now. We need to get rid of the beetle first and have adequate rainfall or the new trees will experience the same fate as the ones now,” he said.

The fight is a personal one, Prof Kosol says: “Thailand is a factory for food production. If we have to order raw material from producers in other countries, that is a shame. I’m a coconut farmer. I have farmers’ blood, so I must find the best way to treat these trees so they can survive.”