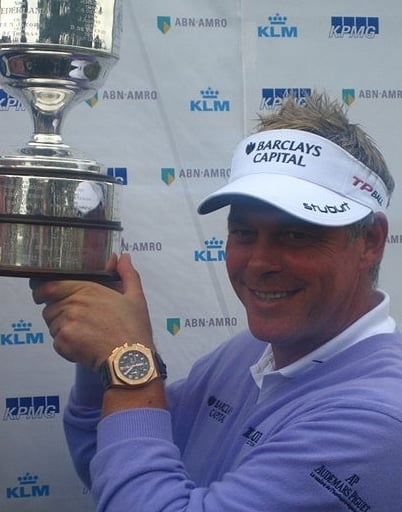 With Graeme McDowell winning the US Open in 2010 and 22 year-old Rory McIlroy taking the 2011 title, Clarke’s performance shows the small country to be the golf capital of the world.

Clarke, 42, shrugged off a fourth round charge from four-time major winner Phil Mickelson on the front nine to score a level par 70, five-under-par 275 for the tournament, and win his first major title.

Dustin Johnson, from the US, also pushed Clarke in the final round, but a double-bogey seven on the par-five 14th opened a four shot gap between the two players. Bogey’s on 17 and 18 from Clarke and one on 18 from Johnson gave the cigar-loving Clarke a three-shot winning margin.

Conditions at St. George’s were treacherous on Sunday, but Clarke played solid shots and never once looked nervous, even when Mickelson fired four birdies and an eagle over the first 10 holes. Spain’s Sergio Garcia also looked threatening, notching four birdies in his first seven holes.

Proof of the demanding 7,211 yards course was reflected by both the world number one Luke Donald and number two Lee Westwood, not making the cut.

Top amateur prize went to England’s Tom Lewis who finished tied for 30th, but will be remembered for a stunning 65 on day one of the championship.

This was Clarke’s 20th attempt to win a major title since turning professional in 1990. The ever-popular character from Dungannon lost his wife Heather to cancer in August, 2006, but elected to play in the Ryder Cup six weeks later. Clarke’s contribution secured an emotional victory for Europe, and similar scenes were witnessed yesterday at the Open.

“Everybody has had their tough times and I’ve had mine. I’m delighted to have won, and there’s no better major to win than the Open,” said Darren.

“The celebrations will go on for a very long time. There will be many, many hangovers,” he added.

In 1947, Fred Daly became the first Irish golfer to win the Open. Padraig Harrington from the Republic of Ireland then won consecutive Open titles in 2007 and 2008, followed in the same year with the PGA Championship. In total, Irish golfers have now won six majors from the 19 played since 2007. The US have also won six, South Africa three, Argentina two, Germany and South Korea have one each.

The PGA Championship is the final major of 2011 which will be played at the Atlanta Athletic Club in August.

Six Senses Phuket Raceweek off to record start, before the first gun

For the love of dolphins: NGOs to launch heated campaign in Phuket