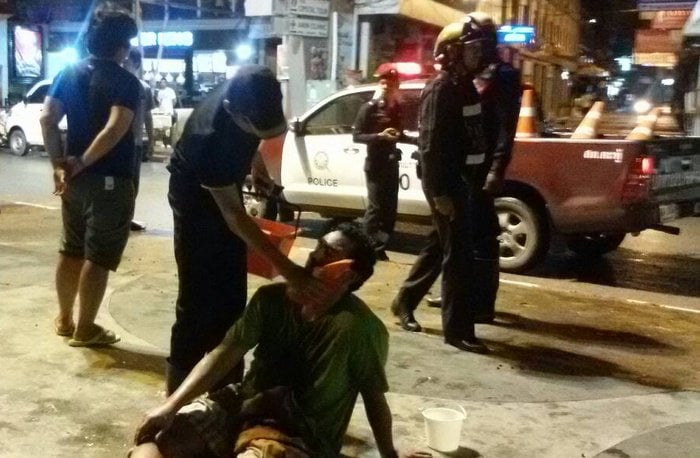 “Our officers were on a routine patrol when they saw two men fighting in front of the Royal Palm Beach Front resort on Thaweewong Road,” said Lt Sarawut Putthapornapiban of the Patong Police.

Mr Amnart was in possession of a loaded .38 handgun.

“Mr Mutariy said that he was walking down the road when Mr Amnart came out of nowhere and started to attack him,” said Lt Sarawut. “He also claimed that Mr Amnart hit him in the face with the firearm.”

Mr Mutariy was taken to Patong Hospital and has since been released.

Mr Amnart was charged with assault and carrying an unlicensed firearm in public.

Kathu District Chief Sayan Chanachaiwong told the Phuket Gazette that he was not aware of the incident. However, he said that he would contact the Patong Police in order to revoke Mr Amnart’s civil defence volunteer card, if he is convicted.

Six months ago (in March) a civil defence volunteer confessed to gunning down his girlfriend inside a somtam shop in Phuket (story here).

Australian Boarding and Day School Fair to be held at RPM