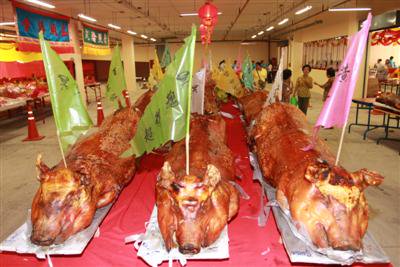 Science and Technology Minister Kalaya Sophonpanich presided over the opening of the festivities, which featured Thai and Chinese cultural shows on a stage in front of the market.

It was the first major activity to take place at the new market, which municipal authorities hope will be open for business by year’s end.

The festival is held on the first day of the waxing moon in the seventh Chinese calendar month, when believers make merit for the spirits of their ancestors.

One of the culinary highlights on display were scores of red turtle-shaped Chinese sweets called Ang Ku.

Made of wheat flour and sugar dough, the enormous turtles are a symbol of longevity.

In her opening speech Khunying Kalaya lauded Phuket’s environment and culture and promised continued government support for its economy.