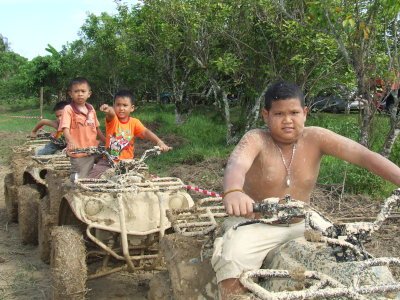 PHUKET: Children’s Day activities kicked off in Phuket today with addresses to the island’s next generation by the Phuket Governor and head of the provincial council.

Gov Tri said he was pleased to pass on the wishes of Thai premier Abhisit Vejjajiva wishing all the children of Thailand happiness, prosperity, health and ethical development for the good of the Thai nation.

There were a large number of options for Phuket parents to indulge their children on the special day.

Children at the Srisoonthorn Tambon Administration Organization (OrBorTor) office took part in events ranging from raffles, balloon popping and coloring competitions to rides on all-terrain vehicles and pictures with OrBorTor President Tanti Wirach in his office.

A Marines shooting demonstration and a mock emergency sea rescue with a helicopter were highlights. Guests were also allowed to board the HTMS Bang Pakong, where children had a chance to sit in the captain’s chair and play with the ship’s equipment.

Children were also given lessons in how to use weapons properly at the 22nd Anti-Aircraft Battalion’s tent where guns and anti-aircraft weapons were on hand.

Among the newcomers was the recently-opened Kathu Tin Mining Museum near Loch Palm Golf Course which was open to all, including foreigners, free-of-charge all day.