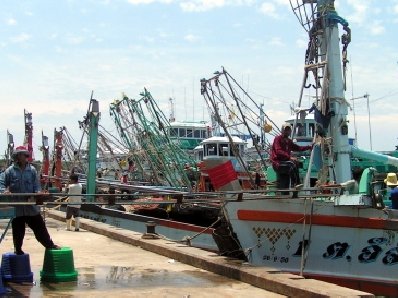 PHUKET: In a move that would more than double Phuket’s tuna-fishing fleet – already the third largest in Asia – a delegation of Taiwanese investors are looking to set up an operations center in Phuket to take advantage of increased tuna stocks in the Andaman Sea.

To take advantage of this, Seaspire International would like to move its regional operations base from Indonesia to Phuket.

The move would see the company’s 300 tuna-fishing vessels make Phuket their home port, more than doubling the island’s existing fleet of 200 tuna boats.

The license is needed as the company’s catch is exported solely to markets in the US and Japan, Mr Supakorn said.

“We need a cold-storage facility to keep our fish as fresh as possible, because we can fish for tuna only six months a year and processed tuna has a higher value-added yield than fresh tuna,” he explained.

“We are currently studying the possibility of expanding our investment. We are ready to gear up for this business and hope to find the right location by the end of March,” Mr Supakorn added.

Gov Tri told the group he would liaise with all the relevant government agencies to ensure that all the necessary documents are processed as quickly as possible.