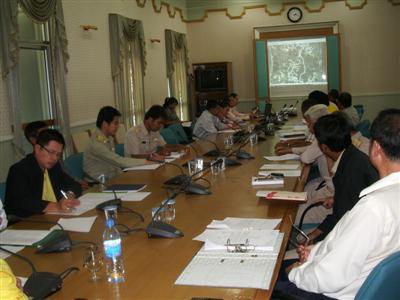 CHERNG TALAY, PHUKET: Cherng Talay is drying up. That’s the fear of many local residents, who voiced their concerns at a meeting at Phuket Provincial Hall on Monday.

Residents say Cherng Talay’s ponds are drying up, saltwater intrusion is lowering the quality of what little water remains and groundwater resources are being diverted from their neighborhoods by property developers.

One TAO officer agreed, saying he knew of at least one property project that was using up ground water and causing a pond to desiccate.

Amnart Tantitamsopon, a geologist, said the problem was related to supply and demand. A growing island population is using more water, but there is currently less rainfall than normal due to the ‘El Nino’ effect.

Large construction projects were also a cause, he said.

“Property development covers the earth with concrete, preventing water from seeping into the ground,” he said.

“Increased amounts of dissolved iron in fresh water due to the history of tin mining in the area is also a problem,” he added.

The provincial groundwater management unit and the Phuket Provincial Office of Natural Resources and Environment should work together to map out areas where groundwater is being used, he said.

Mr Amnart said there needed to be better rainwater collection strategies, as this is the island’s only source of fresh water.

“Every property development and household should have a water tank to store rain during dry periods,” he said.

“People think Phuket is a tropical island, but they forget that during the hot season it can get very dry,” he said.

Thus far in 2010, the Meteorological Department (MET) monitoring station in Phuket Town has recorded just 117.7 millimeters of rainfall. The second station at Phuket Airport has recorded even less, just 75.3mm.

February is statistically the driest month at both stations.

Rainfall amounts typically begin to increase significantly in April with the onset of the monsoon season.

The most serious droughts in Phuket occur when the monsoon season arrives late and reserve supplies are used up during the high season for tourism, when demand for water is at its highest.

Is the lack of rainfall affecting your water supply? Tell us about it in the reader’s forum below or send pictures  to: editor@phuketgazette.net

Phuket gears up for Bike Week 2010